I listen to all kinds of music. Even if it's a particular style of music I don't normally listen to, I can appriciate the vocals, arrangments, ect. Lately, I've re-discovered Iron Maiden. Part of the new wave British heavy metal invasion of the early '80's, they really took off when Bruce Dickinson took over lead vocal duties. His signiture style is still recognized as one of the best ever. Very crisp lead guitar work and complex bass tracks completed the package.

Posted by Mark Studnicki at 7:38 AM

Although my 'cross season just ended 8 weeks ago, MTB season is now just a couple days away. The weather this winter has been worse than last year so there is still a possibility the trails will not be ready and the first race might be postponed as it was last year. There are 2 road events this weekend just in case I get itchy legs. I will be contesting 2 different MTB series again this year: The Heartland Series and the Midwest Fat Tire Series. I've won the overall in both series several times over that past 2-3 seasons but this year might be a different story. I'm starting to move other things in life further up the priority list (for a change) so the racing will move down the list and try to become the fun hobby it started out to be over 20 years ago. I will miss one of the Heartland races while i'm in Italy (not complaining about that one). I'll miss several of the MWFTS races due to the driving distance (I've set a 2 hour-each way limit), summer heat and proximity to 'cross season. The Heartland series is good in the sence it's over by June, wereas the MWFTS goes all the way into September. I will do that series though July till it really starts getting HOT and miserable, then shut the mtb season down in favor of my 'cross specific preparation. My MTB is more-or-less ready to go although i'll be racing on last years cassette and chain. It took a few weeks to get my MTB skills back up to par. I rely very heavily on those skills since i'm not the fittest guy out there, but I can out-ride most techinally. My top-secret interval routines have been brutal but effective, so we'll see what happens come Sunday. I've compared this winter to last winter in terms of hours in the saddle, and i'm a bit ahead of last year, and last year I was FLYING at the first few races.
Posted by Mark Studnicki at 7:23 AM 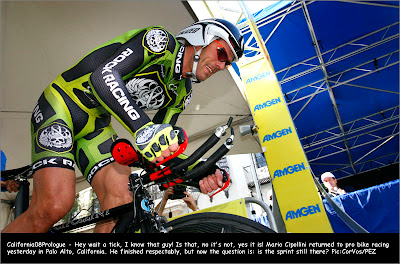 What can you say about this guy that hasn't been said already. He was 3rd in todays Tour of California amongst some of the best. Only Tom Boonen and and Heinrich Haussler got the better of a guy contesting his first sprint finish in 3 years. If I could take 3 years off from racing and come back to racing with results like this, I'd be doing it about every 4 years :-) With all the crap happening in the sport, this is like taking a nice deep breath after hyperventilating for a while. I have always been a fan of Mario's. I'm not a big fan of Rock Racing's Mike Ball personally, but he does bring something new to racing, and he did get Mario racing in the U.S. for our viewing pleasure. I don't really agree with his 3 riders that are STILL in the dog house on this Operation Puerto deal. The UCI/ASO/WADA (and any other organizations that seem to have something to do with this) need to either shit or get off the pot with this thing for heaven sakes. If they can't prove these guys doped, then just drop it and let them get back to racing. Remember when Lance got accused of just about everything? Nothing was proved, therefore nothing was done, and he was never NOT allowed to race. Those days are long gone! The pic is from Pezcycling.com.
Posted by Mark Studnicki at 5:54 PM

Here we go! This is just getting stupid. So much for Alberto defending his title. We may NEVER see anybody defend a Tour win ever again. Armstrong was "accused" of doing just about everything during his Tour de France dominance but the thought of not letting him or his team race would have been blasphomy. Now, if your name (or even a code word they think might be a reference to you) is even remotely linked to anything remotely linked to something that might have to do with anything drug related, your career is over. It will be a wide-open race this year all right. With most of the top riders out for this reason and that reason, or for no real reason, we might have to do a little research to figure out who the riders are that end up fighting for the win.
Posted by Mark Studnicki at 6:52 AM

Giro d'Italia only 13 weeks away

We still have some room available! Visit my Italian Vacations website or contact me for more information. Looks like the Slipstream Team will be the sole American team flying the flag. I fully expect Dave Zabriskie to show his potenital as a serious GC contender, providing he's given the longer leash. I'm sure Jonathan Vaughters knows the Z-man's potential and has everything under control. Past history has shown NOT to put all your eggs into the Tom Danialson basket. Tom has (was) volunteered for a lenthy/gritty Spring Classics schedule this year. That should toughten him up nicely and knock the EGO down a few notches. We'll ride up and camp out somewhere on the finishing climb of stage 7 at this years Giro to cheer these guys on. I'm leaving the American Flag Speedo at home this year as to not embarass myself and those around me. Might be a bit chilly up at that altitude, so my LocalCycling team jacket will do nicely!
Posted by Mark Studnicki at 11:08 AM 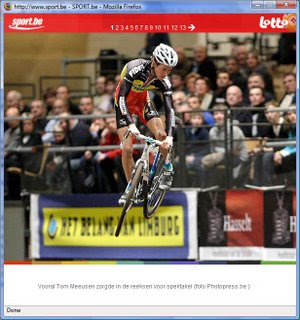 I saw this pic on Greg Keller's Mud and Cowbells site. I used to do stuff like this back in my BMX days but the idea of doing it on a 'cross bike honestly never remotely entered my mind. This shot of Tom gives you the sense that he does this all day long. It's pretty tough to get promoters to put anything that would resemble a jump on a course for the fear that someone would land on their face. Obviously the fans over there demand a bit more from their 'cross hero's and the promoters have a ball building jumps, flyover ramps, you name it.
Posted by Mark Studnicki at 7:02 PM