New "bike rack" for the truck 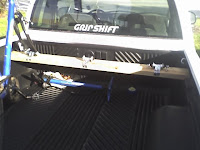 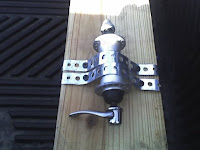 I'd thought about doing this for a while, but finally pulled the plug on Friday. With 3 cross bikes going in the back of my little pick-up, and not much extra in the cookie jar, I came up with this:

Total out-of-pocket cost: $1.98 for a roll of galvanised plumbers strapping.
5ft-long 2x6, some drywall screws that I already had, and 3 old front hubs in the junk bin.
Ya, it's Ghetto, but worked like a charm!
Posted by Mark Studnicki at 12:48 PM

Day one: Very Cold. Got a descent start and stayed on the right wheels at least. The course had a nasty climb which suited me, but got very ugly in the closing laps. Very steep at the top and the 42x26 hurt. Buried myself 10 times over to stay in the money. Ended up 21st out of roughly 39 starters and stayed on the lead lap. Todd Wells put the hurt on Chris Horner and Bjorn Sealander.

Day tow: COLD! Got a crappy start and just never really felt in control of my legs. The main climb/desent was now reversed, making a brutal run-up (for mortal human beings) that you could re-mount and climb the top portion, followed by the a fast bumpy descent (yesterdays climb). Todd Wells and Chris Horner were riding up the run-up, even after they placed logs at the bottom. Beyond impressive if you ask me. He would hop the logs and almost be at a complete stand still, then just power up it. The crowd was going insane as he did they on EVERY LAP. Meanwhile back in the "laughing group", I was not laughing at all. Lower back was DONE, and the legs never had anything to even attempt a moderate stride up this thing. Mananged to get lapped by Todd and Chris so at least I had 1 less lap than some and ended up in 24th, in the money baby. BOTH DAYS! BOOYA
Posted by Mark Studnicki at 8:02 AM

A light over-night rain and MUCH COLDER temps were on tap for Sunday's series final race. With the course reversed, making for a long paved start, caos insued. These starts are crutial so I made sure I was where I needed to be. I got on the wheel of Bill Stolte and Adam Mills and the 3 of us started to pull away. Behind us, the chase was on with Adam Lang, Troy Krause, and Darren Shlake, and Cameron Chambers. Bill Stolte would put in a surge and leave me and Mills behind periodically but then seem to wait up for Mills to get back on. I was doing a little work as possible since I knew the Mills was way stronger and would eventually put me in trouble. I could see this coming so I let him guy and allowed the chase group to come up. Cameron tried a few attacks but was plagued by mechanicals and was never a factor later on. Once again it came down to me and Schlake and Adam Lang. Adam would eventually fade leaving me and Darren fighting for 3rd and 4th. Darren was going for the Nebraska State Title, and with Troy Krause and Jesse Petersen not too far back, we worked together to make sure he got the State title and I got the series. He would pull down the long paved road while I would keep the pass going on the grass. All worked out and now it's time for the UCI Jingle Cross races in Iowa next weekend.
Posted by Mark Studnicki at 6:48 PM

A good size field of 22 riders were on hand in very un-seasonably warm weather and bone dry conditions. Since I was leading the series, I unintentionally kept the whole field waiting while I showed up a few minutes late for the start. Actually, they were trying to get the race started early and I was right on schedule. As I always do, I picked the two guys on the front row that wouldn't mind me backing right in. Start from the back? Me? Ahhh, not today. At the gun, I got the wholeshot and led onto the grass with Bill Stolte, Adam Mills, and Tony Wilhelm (all HRRC/
Trek Stores) setting the front group. The first few laps stayed together with myself, Darren Shlake (Monkey Wrench), Iowa's Brandon Jessop, and KCCX's Adam Lang keeping the front group together and not letting the 2 Trek teammates run away with it. At about the mid point in the race, Stolte and Mills started to pull away while I was locked into the chase group with Jessop and Shlake. Adam Lang fell away and me and Darren tried to get rid of Jessop but he wouldn't budge. Jessop would eventually drop me and Darren and bridge up to Adam Mills. That was perfectly fine with me and Darren since Jessop just couldn't keep him mouth shut. He's obviously fast, but just wasn't happy with how me and Darren were riding. If he had been paying attention to the series points, he would have known that me and Darren were going for the series title, and he was stuck with us and wanted us to pull him around. Darren told him he was a dick at one point and I told him he should go back to Iowa. One "the mouth" was out of our way, me and Darren starting working each other over. I had the lead coming into the double run-up and put in one last attack on the small hill before the paved finish but he got back on my wheel and came around me in the sprint for 4th while I got 5th. Adam Lang hung on for 6th while Troy Krause, Chris Wallace, Ryan Legg, and early race leader Tony Wilhelm rounded out the final money-paying spots.
Posted by Mark Studnicki at 6:28 PM

Very un-seasonably warm weather and bone dry conditions are not my forte. Very strong field of guys including Shadd Smith (KCCX\Verge), Bill Stolt and Adam Mills (Both HRRC/ Trek Stores), and Cameron Chambers. The race kicked off with a frantic paved start to a sharp left onto the grass with the triple barrier right after that. KCCX was all over the front with Shadd Smith, Bill Marshall, William Gault and ChrisCross winner Mathew Ankney leading the charge. Bill Stolte, Adam Mills, and Cameron Chambers all made the initial front group. I got the good start and made the first selection but it pushed me too deep and I had to ease up. Once I got my breath I was able to start pulling guys back. Mathew Ankney and Adam Lang were the first guys I got around. Bill Marshall and a fading Bill Stolte were next. Bill was able to stay with me as I continued to hunt guys down in front. Brad Sullivan was next and he quickly got in behind me and Bill. I knew Bill was fading but he wasn't falling off either. I quickly attacked with a few laps to go trying to dislodge Brad and Bill but Bill stayed right with me. Coming into the bell lap, I knew I had been doing most of the work and Bill was fresh. We had brief words but just heat-of-the-moment race stuff. He's incredibly strong and pulling him around the course lap after lap was giving me some good PR but I knew he could easily drop me and he did. Hitting 1-to-go he got the gap on me and I just didn't have the snap. Ended up 5th which is still good considering the guys I finished ahead of. Brad Sullivan held off a hard charging Bill Marshall and William Gault while Steve Songer and Dave Hejduk (bothTeam X) rounded out the top 10. After the race Bill Stolte told me he felt bad for sitting on for so long, but it's all part of good racing. I knew he was back there and I could have forced the issue more but I didn't. Good hard racing is always good, no matter which end of the deal you fall into.
Posted by Mark Studnicki at 4:54 PM 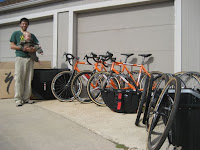 Jonathan Baker is definately committed. He sold his house in Colorado, took a 4 month leave-of-absense from his job (a very nice job), and moved the whole family(Wife and 2 children) over to Belgium. Just like Jonathan Page before him, he's going through the ultimate trial by fire over there.
The level of organization required to pull this off is un-imaginable. Kudos to all the companies that are supporting him in this adventure: Primus Mootry frames, the Vechios Bike Shop, and ROL wheels. Time will tell if teams over there will take notice of his commitment and jump at the chance to get him aboard.

Posted by Mark Studnicki at 8:18 AM

Had another ALMOST perfect day. Got a great start and got rid of everybody on my wheel, expect for Jesse Petersen (Monkey Wrench) from Nebraska. I was hopping the barries every time through just like Saturday and that got me a nice gap on him each lap, but he would fly across the sand pit and make up the gap every time. Shadd Smith was once again off the front and running away with it but this time we could see him less than 1 minute ahead. While me and Jesse were busy trying to get rid of each other, we had pulled away and left the rest of the race behind. Adam mills was able get off the group he was with and had 4th wrapped up will Jesse's teammate Nate Woodman was holding down the 5th and final money spot. Comeing into the last 1/4 of the last lap, I let Jesse lead into the barriers. I hopped 'em and tried to sprint away. Coming into the sand pit, I ran it on the right side where he had been riding it, trying to mess him up and keep my 2nd place. I had played this card the previous lap and it worked like a charm. Unfortunately, I showed my hand 1 lap too early and he knew it was coming. He was sprinting behind me entering the sand and rode right through the middle and had 20 feet on me coming out the other side and held the gap to the line. Very impressive.
Posted by Mark Studnicki at 6:31 AM

Had a perfect race, even with a flat and bike change. Had a Challenge Grifo bead come apart and the tube started sticking out. Thank God it waited till right as I was coming into the pit before it blew. Did the bike change and got back to the guy I was with, and eventually passed and dropped him. Shadd Smith was still out front with Bill Stolte in second. I was back in third with Cameraon Chambers in 4th and a hard-charging Josh Johnson coming up in fifth. Cameron slid backwards as Josh worked his way up to me. He got by me and put a small gap on me. I was concerned with Dave White and Adam Mills about 10 seconds behind me so I put it in conservation mode to hold 4th place. Dave White was able to get past Mills to round out the top 5. Chris Locke as usual put on a great event with Roger Harrison and Heather Jordan putting in the always great jobs.