I nice light dusting of snow Friday night made for a perfect weekend of MTB riding, albeit super ass cold. Saturday morning I couldn't quite get up early enough to meet the group at Landahl at 9am, so I headed over to Shadd Smiths house and we rode over to Minor Park. It was in the single digits when Shadd, Mike Palito, and I left his house at 10am. The exposed windy ride over to Minor was brutal. Wind chills hovering well below zero. We got there and collected the rest of the group and into the trails we went. I had never ridden these trails (yes, after 5 years of living here). Very cool and technical. The light covering of snow (more like little ice pellets) on the ground made for pretty descent traction. After a couple hours, the the sun was starting to melt some of the snow, especially on the rocks. Temps still never got above the low teens.
Sunday I some-how managed to crawl out of bed and meet the CowTown group at Landahl before 8am. Still cold but nothing like Saturday. It's amazing how nice 15 feels after riding in 5. Trails were rock hard and fast. We did a bit of everything out there. All the normal race trails plus all the steep rocky crap they never use for races. Got in a solid 2.5 hours and back home by noon'ish. More snow on the way, yeahhh.
Posted by Mark Studnicki at 9:39 AM

Nice to have some time to "reflect" on this past 'cross season, and NOT have to worry about riding at the right heartrate for right amount of time. Won 3 "A" races (2 more than the previous season) but I wouldn't call those deep fields by any means. They were good for the moral and the pocketbook so they were great from that standpoint. Early part of the season was plaged by some mis-timed preparations and some nagging mechanicals. I eventually corrected the preparation part of that but the nagging mechanical lingered for a while longer and cuminated with some verbal profanity at the State Championships race.
Now I have about a month or so to do whatever the hell kind of rides I want and not stress about it. This past weekend was a case of extreme weather changes. Went out Friday night in 2" plus of that fresh powder that fell over night. Just rode down the street to Lake Lenexa and did a couple laps. Once the sun was completely down, the temps took a nose dive to around 20, sending be home in a hurry. Saturday morning was a group ride out at Shawnee Mission Park. Trek Store guys Tom Price, Scott Stevens, and Marko, 360's Andy Lucas and Brian Williams, KU's Shad Shreiner, and my teammate Joe Houston. The weather was warming up fast but the hard-packed snowy trails were perfect for a while. My dry-hardpack tire setup wasn't ideal and I hit the ground once rather vigorously. The snow was melting fast and we exited the trails well before making a mess. By late afternoon, almost all the snow was melted away. Sunday I was pretty thrashed so I went for an easy "paved" ride on the 'cross pit bike. Felt terrible but that's what the off-season is for right? My 'cross "A" bike is now hung up till next August. Took the various pieces off of it that I stole off of my road bike, and put the road bike back together. MIGHT do a few road events this year given the limited MTB races in the area.
Posted by Mark Studnicki at 9:26 AM

20th and finally the last 'cross race of the season. Great weather and a great course. About 20% of the course was paved or gravel, about 75% was grass with really good traction. That remaining 5% is where the race was decided. The start is on a gravel road section that leads in to the parking lot and an uphill drag to the turn onto the grass. Shadd Smith led us onto the green with Bill marshall 2nd, myself in 3rd and Tige Lamb in 4th. After a couple turns Shadd crash in a fast slick turn and tied up Bill Marshall in the yard sale. I was handed the lead, but 2 turns later I hit the deck in a similar fashion. This time Tige Lamb was right behind me and hit mY bike sending him end over end. Took a few seconds to get untangled from the course tape, and I was now in dead last. I put it into serious chase mode. I got back by Tige and Alex Edwards and now had my eyes on Bill Marshall and Adam Mills. Those two were working together and I was solo. Not good for me with the wind and the gravel or pavement section. I got painfully close to guys, maybe 4 or 5 seconds, but the effects of the hard chase were killing me, so I had to watch those 2 ride away and just focus on keeping Tom Price behind me. He got by once and was riding away, then had some kind of mechanical. I caught him just as he was getting going again so I tried to push the pace. I did OK at that for a while, but Tom is relentless and stayed right with me. He eventually went by and just left me for good. While all of this was going on. Chris Wallace was off the front winning with Cameron Chambers in 2nd. Those 2 were together for a while but Chris eventually pulled away. Behind Cameron, Shadd Smith recovered some-what from his first lap crash and held down 3rd. The duo of Bill Marshall and Adam Mills came in 4th and 5th, with me cruising in for 6th. My first lap crash didn't hurt at all, other than my rear wheel got a good wobble in it that brake the brake pads the whole race. I didn't notice that till after the race. Other than the first lap crash, the only other incidents were 1 botched re-mount after the barriers and getting tangled in some course tape on the run-up. The run-up was getting very bad late in the race so the main racing line was moving to the right closer to the stake and course tape. I went over it and ended up getting tangled up. I never saw it but I heard Alex Edwards had a very bad mishap just after the barries and going onto the pavement. Hope he is OK, since he left the race immediately thereafter.
Posted by Mark Studnicki at 4:45 PM 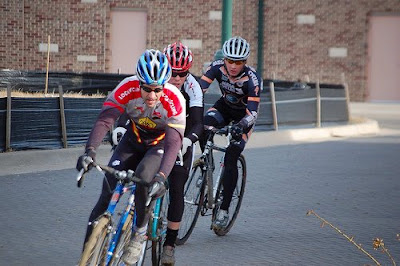 The gorgeous 60 degree weather from Saturday turned sub-freezing for Sunday's race at the Tuileries Shopping Center. 22 degrees at the 2pm race start, but the course was softening up from the direct sun. Ground was still rock hard but the top 1/4" was like grease. The course was pancake flat and wound all over the shopping center and in between buildings, including Epic Bike and Sport. Good start, led briefly early in lap 1 after Shadd Smith slid out in a turn. I quickly settled into 3rd with Shadd and Cameron Cambers dueling for the lead. I had Bill Marshall and Alex Edwards close for a while. Alex eventually put it in training mode while Bill stayed close enought for the rest of the race to keep me working. Had to stop a few times and dig frozen mud out from the rear brakes. It got really clogged up a few times to the point where it was rubbing on the tire and hard to peddle. The course was much better than last year. They utilized more of the parking area and made the laps longer. Plenty of tight 180 turns that were really greasy. The course was actually starting to freeze back up once the sun starting getting low, but by then the bikes, especially pedals, were packed up and getting hard to clip in.
Posted by Mark Studnicki at 3:54 PM

2008 is over. Had to skip Wednesday afternoons 'cross race. Had to work (yes, some of us have regular jobs). I wouldn't have been any good anyway. Last Sundays Swamp Cross (Boss Cross 6k run) left my legs really knotted up. Should have stretched them out really good after the race, but you know that goes. Maybe next year i'll get on the "Shadd Smith Yoga Program".

New Years Resolutions:
Be the best person I can be for my gal Kristine, her 2 dogs, and my cute little white dog.
Go back to racing Masters in 'cross.

Get a new job where I actual make a difference.