Bella Vita Vacations client Chris Locke has posted some great pics from his recent trip with us.
Posted by Mark Studnicki at 9:55 AM

We arrived in Tahoe last Thursday to crystal clear skies and warming sun. I headed over to Reno to pick up Chris Locke. We got back in time to get his bike together and do a quick 90min "FLAT" spin ride over to Squaw Valley's Olympic Village. Friday's ride got a bit more vertical with a trip to Truckee, lap around Donner Lake and the climb up to "Rainbow Bridge" at the top of Donner Pass. Plenty of snow still up there. We enjoyed the 72-mile lap around the Lake on Saturday while all the big teams were out pre-riding the course. Interesting weather left us scratching our heads on Sunday morning. We had perfect weather Thursday, Friday, and Saturday. The weather forecast called for snow to come in late Saturday night and into Sunday morning, but the forecast has been completely wrong up to this point. We woke up Sunday to about 4" inchs of fresh snow. Most of the roads were simply not rideable and several of the race caravan moto's hit the deck just getting out of town to look at the course. The snow was melting pretty quick, leaving just wet roads to deal with. The race was officially shortened to just 50-something miles when we left to head to the finish at the Northstar-at-Tahoe resort. It was a blizzard there and just got worse. We were there about 15min when we heard that stage was officially cancelled. Several Friends of mine, including Neil Shirley and Keith Ketterer, did the 50mile shortened course as part of the Amgen Ride to Recovery. They finished up cold, wet, and bikes completely frozen-up, stuck in 1 gear. We still enjoyed the expo area for a while before calling it a day. We woke up Sunday to really cold temps but more-or-less dry roads. Apparently the road over Donner Pass was too slick so they moved the Stage 2 start from Squaw Valley to Nevada City, about 70 miles away, so we missed the start of stage 2 as well. Headed out for a solid 4hr ride. Snow moved back in just as we were finishing up. I managed to get Chris back to the airport in Reno yesterday while the road over Rose Summit was still open. It was still snowing yesterday when we packed up and started heading back to the Bay Area. We ran into a blizzard moving it's way toward Tahoe and ended up getting a Police/CalTrans escort down the the hill on I-80. Traffic heading up the hill was stopped at the bottom and we assume was eventually escorted up in groups. Back home and back to the "9 to 5". Pics coming.
Posted by Mark Studnicki at 9:37 AM 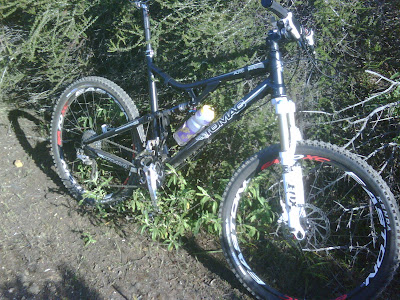 Amazing bike. It's been a while since I've had a whole bike that worked perfectly, and this one does. 120mm (front and back) is a lot for somebody that's never had it. The old Niner frame and Manitou forks are already on their way to the Ebay'ers that bought them. Got it out for the first test ride last Friday. Couldn't do much with my sinuses completely ruined. Spent most of that time just adjusting stuff like lever/shifter position, tire pressure, etc. Got it our today for some more serious stuff. Again, my sinuses kept me honest up the climbs, but it definately climbs better than my hardtail, especially on the rougher stuff. Of course going down anything is amazing. My position on the bike has been getting more and more upright over the years as the flexibility in my lower back gets a little less every year. I'm now running the widest bars I ever have and the 110mm stem, which to some might be considered long, is the shortest I have every used. I started on 150mm stems (yes, that is 6 inches) back in the '80's and first half of the '90's, Then went to 135mm for a few years, then to a 120 the last few years. Now it's 110mm. Big difference. The whole 29'er thing just didn't work for me. Granted, if I had built up mine a little better, i might have had a different experience. I just couldn't get past the high rotational inertia of those things. I only had a 1X9 setup on it so that didn't help. One of the new double ring setups would have solved a lot of problems. Amazingly, the new bike is about the same weight as the old one. I was shocked when I actually weight the old one for the first time. I might actually do a mtb race coming up. New bike will be dialed in but it's more up to my sinuses cooperating.
Posted by Mark Studnicki at 5:54 PM