I'm fortunate that I haven't had too many bad 'cross races over the years, but yesterday was definately the worst one ever. Just wasn't hydrated properly and the body didn't react well to the un-seasonable 85'ish degrees. Huge turnout. I got the perfect start, came through lap 1 in 3rd, and settled in with the eventual podium finishers. After about 15-20 minutes, the power output just shut down like someone flicked a switch off. Once guys started blowing by me that never blow by me, I was just mentally not in it anymore. At that point I was just turning the pedals over. I should have just pulled out and reduced the damage but I don't like pulling out of races. Super dehydrated, headache, feel like crap. Rather embarassing to finish like that but it happens to everybody at some point. *******mystery solved: the Pollen count and air-born mold count have been through the roof that last few days with the warmer-than-normal weather. My allergies tend to flair up whenever the weather changes drastically and it sure did last week right before the race. Hopefully FALL is finally here for good and I can break out the long-sleeves.
Posted by Mark Studnicki at 8:23 AM


OK. Last weekend after I got back into town from the Hermann Night Race, I took the new Niner out for it's first REAL mtb ride. It had been about 5 weeks since i'd ridden out there. It's ROCKY AS HELL! I don't remember it being that bad at the 3hr race there back in July. We've had about 2 feet of rain since then. I've been racing a full-suspension bike for the last 10 or so years, so this was an eye opener. I need to re-think the whole "keep your ass on the seat and just don't stop pedaling" concept that has won me more races over the last decade, I don't even remember going to some. Anyway, got the first real ride in the books and made a few adjustments. Last night I went back out there "at speed". Since i'm not running tubeless just yet, running 25psi was a huge risk and the end result wasn't avoided.
Posted by Mark Studnicki at 8:27 PM

Hermann Under The Lights

Wow. What a cool race this was. First 'cross race at night for me as i'm sure it was for most of the other racers. The venue was terrific, but brutal. The course's start/finish area was on a grassy flat area on top of a hill next to a large athletic/sports complex area. Once we renegotiated the very technical start with it numerous tight turns and first set of barriers, we bombed down a tricky paved hill and into a super fast paved section that had me wound out in my 42/12. Some of these turns weren't lit very well and they were only taken at speed because i'd prerode the course several times while it was still light. Back onto the grass for several tight 180's, then the mandatory playground sand pit run. Then the real fun started. This entire area was under water just a week ago, so even thought the grass on top was dry, the underlying ground was soaked. The Intermediate race turned this section into a 150 yard long pig trough that got worse each lap. It was barely ridable in the later laps. After the mud pit, it was back on the pavement for bit of flat recovery before the courses most brutal feature, the stairs. I had a good 2nd row call up so I was good to go at the start. I knew the start would be super critical so I made the move right off the start line and got into the first turn in 3rd place with only (i think) Shadd Smith and Nate Rice in front. 2 fast guys to follow for sure. I managed to stay with them in 3 place for the first lap. A couple very fast guys didn't get great starts and were steadily moving up on the wide open course. Eventual race winner Josh Johnson was one of those guys. A front row start for him somehow went bad and he got stuck in traffic but was caming back fast. Behind me was a long line of fast guys: Bill Stolte, Cale McCaninch, Mat Ankney, Adam Mills, Bill Marshall, Jeff Winkler, Ethan Froese, Chris Wallace, Will Gault, and Cameron Chambers. The pace was very brisk and the stairs were taking a toll on my legs. I was still able to make up time on the rest of course, especially in the mud. Bill Stolte got by me as did eventual race winner Josh Johnson. Josh quickly crossed the gap to join Stolte, then left him to join the 2 leaders Smith and Rice only a few more seconds up the road. In the closing laps both Cale McAnich and Mat Ankney got by me. Cameron came by me but then quickly pulled off course with some kind of problem. I was now in 7th with 5 laps to go and plenty of fast legs only seconds behind me. Ethan Froese was gaining on and I really had to push it hard to limit the damage. Behind him it as a wheel to wheel battle between Bill Marshal, Jeff Winkler, Adam Mills, and chris Wallace. Over the next few laps that gap to Ethan stayed the same and we were both putting time into the group behind us. Ethan suffered a late race flat and cost him a few places. Hitting the bell lap, I had about a 30 second gap on the group behind. Right after the start/finish line, the 10 lbs of wet grassy mud derailed my chain, fortunately right before the pit. I didn't even hesitate to switch bikes and only lost a few seconds. Having a nice clean(and light) bike helped on that last lap. I just kept it steady and didn't make any mistakes and came in 7th. Adam Mills get the better of Jeff Winkler for the final money-paying spot, with Chris Wallace, Ethan Froese, and Bill Marshall rounding out the top 12. Only the 12 of us were on the lead lap. Here are the final results. The other 33 racers were lapped and pulled. Very cool race and look forward to doing it again next year.
Posted by Mark Studnicki at 5:41 PM 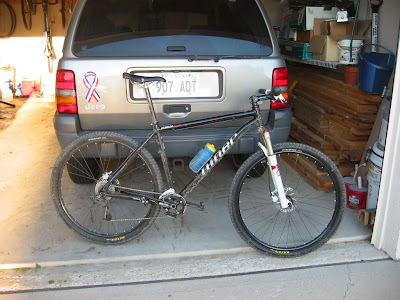 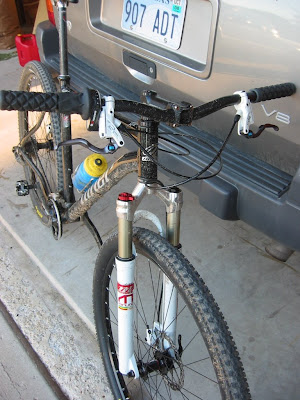 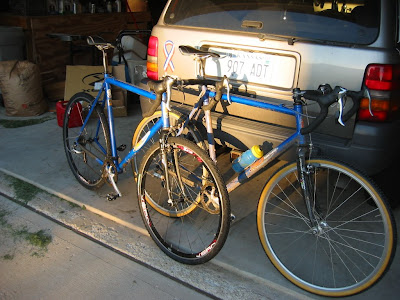