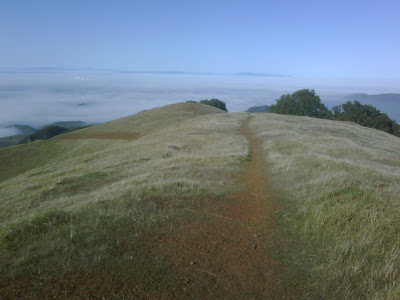 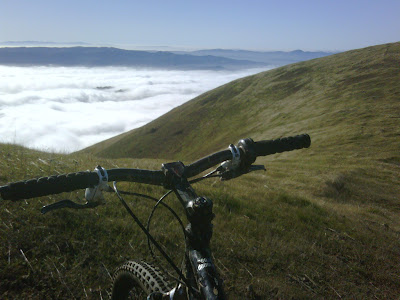 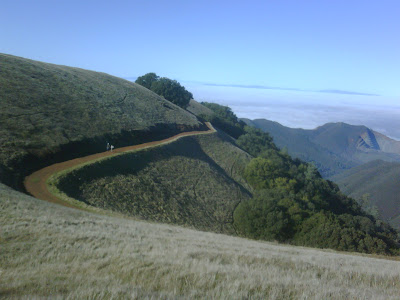 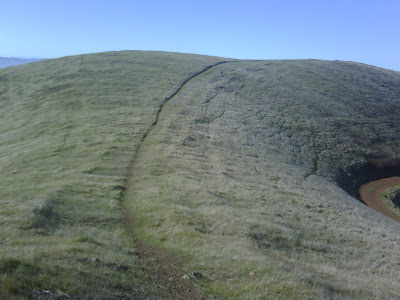 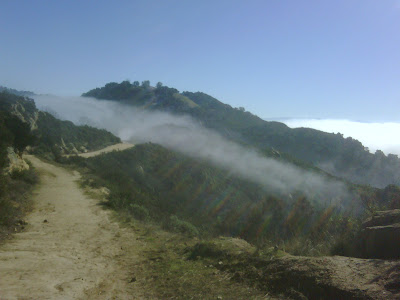 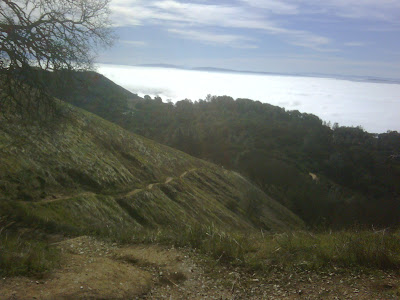 MLK day MTB ride. I've been up Mt. Diablo on road a zillion times allready but i'm still learning my way around the VAST network of dirt trails up there. Yesterday I had ridden up the road to the mid-way point on the climb to scout out some stuff. I ended up bombing down this ridgeline that i'd been down once before. Crazy micro-climates out here. Leaving the house it was brisk and super foggy. Climbed up through the fog and eventually pop out into clear blue sky as far as you could see. The layer of fog obscurred everything below about 1800 feet. The temperature also changed like a light switch. The fog is actually really cold. Bombing down the ridgeline eventually dropped me back into it so the extra cloths went back on that were shed on the way up. To today I got the idea to climb to the summit and back down on dirt. I climbed up the ridgeline that I had descended yesterday. Brisk and foggy again and perfect sticky trails. The ridgeline road gets more than a bit steep for extended periods so it took some effort. Once again I popped out into clear blue sky around 1/2 up the mountain. I ended up climbing the rest of the way up on the road. Mostly hiking only single track on the upper 1/2. The summit showed the fog layer below extending as far I could see in every direction. I rode back down the road a few miles and found a fire road heading off the north. This thing was amazing as it rolled along with a single-track trail cutting across it and zigzagging down the mountain. Having never been down this thing before, I kept it pretty mellow and enjoyed the amazing views. Cooked the rear disk brake once but a quick stop to take a few pics took care of things. I've never seen a fireroad this steep. The bulldozer that cut it obviously just slid down the hill with it's blade down. Just like yesterday, I descended back to the ice-cold fog so the jacket went on. Popped out on the road and descended the rest of the way on pavement. I passed numerous other dirt roads on the way down heading off in different directions so there's much more to see. Felt great to get a couple good days on the mtb with lots of everything and seeing some stuff for the first time. Legs felt good considering how brutal Saturdays group ride was. I've down the Hop ride (house of pain) twice before. Once in the late summer when it was just rediculously fast and another time a few weeks ago when it was pretty mello but I was way out of shape so it hurt just the same. Felt better this time around and stayed in the front. After the normal couple hour loop down the Livermore and back to Danville, the group heading up to Diablo Junction (the 1/2 point on the mountain) from the south side. With the group still 50 strong, I started at the front just to stay in some clean air. The pace started a mello which is NOT what they normally do. I can't kick on the lower slopes of this climb so I have to keep it steady. I went up the first 1/2 mile or so when I hear this creaking bike coming up behind me. I assumed it was just the first guy in the group, with the rest of the group behind him. It was Garmin Cervelo's Kirk Carlsen. He's been staying in town and lighting things up on the group rides lately. The group was still a bit further back with only a couple other guys trying to bridge up. I figured i'd just hang on as long as possible then put it into survival mode. I amazed myself with some excellent climbing form and managed to stay with him all the way to the junctions, 5miles and 2000 vertical feet. It got really tough a few times and definately got me up the climb quick. The next guys were minutes back and most of the group came in 5mins later so I know we put in a solid effort.

Posted by Mark Studnicki at 9:18 PM