First Tuesday Night Worlds and Wednesday Night Hill Ride's in the books last week. Some crazy weather this past week for sure. Rode for the first time in shorts-sleeves on Thursday, then the blizzard on Saturday, and back to a beautifull Spring day today. Last Tuesday's Crit #1 was a rather brisk. Small group but definately quality over quantity. Pace started really quick. Everybody seemed to want to get warmed up in a hurry. Group stayed together with nothing getting too organized to go off the front. After a little pause in the speed around the mid-way point, things got heated up. I hadn't done anything to this point. Things started to really wind up with about 15min to go. I got to the front and hovered around the top five for what seemed like an eternity. It was fast (for me anyway) with Shadd Smith, Adam Mills, Andy Coacha, and a couple others periodically taking turns tightening the screws. I got extremely lucky in following the right wheels. All kinds of carnage was happening behind me us , but I was too focused just trying to hang on. A think the group split a few times behind but seemed to come back together. I never had to take one pull at the front, and probably couldn't have if I had to. Right around the time i'd get to 4th or 3rd, 1 or 2 guys would lauch up the side and string it back out. I'd get lucky again, be on the right wheel, and slot back into 4th or 5th, completely wound out. This happened a lot in the closing laps. I managed to hang in till the bell lap. Legs were in no way up for a sprint so I peeled off coming out of turn 4 and got out of the way. Considering I hadn't seen any leg speed like that since the last Tuesday nite crit last year, I was happy with the way it went. New bike worked like a dream. Nice to have 100% dialed shifting for a change. I found myself shift more often. Wednesday was the first of the Wednesday Night Hill rides. Weather warmed up a bit. Small group. First time up Lawrence Hill is always a shock. I don't do this hill on any other training rides, so i'd sorta forgot about it. Pace was good but controlled up the first few steps. This climb gets harder as you get towards the top. Mark Cole was riding well and was really putting it down. I stayed on him over the the last and steepest pitch right over the top and along the flat top section before dropping back to Midland. Legs were definately burning. Groupo compacto at the lights then onto Renner. Matt Dutcher and teammate Joe Houston set the pace at the bottom and up to the creek crossing, I came around Joe and onto Matt's wheel. It was an all-or-nothing deal by this point so I just had to stand up and go. Legs haven't burned like that since I don't know when. Managed to hang on over the top, Matt right behind me, then a good gap back to the rest. Cruised along Renner and the group was back together by the light at 87th. This was pretty much the end of the ride for me since I turn right at Praire Star and the group is turning left. Some last-minute speed work on Renner through the round-a-bouts and that was it. I'm guessing this weeks Tuesday and Wednesday night rides will be bigger groups and harder.
Posted by Mark Studnicki at 8:24 AM 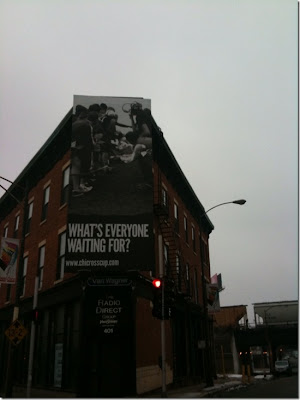 Posted by Mark Studnicki at 9:48 AM

"The bike racing world was rocked by its latest scandal late last week with the announcement that the Szczepaniak brothers both tested positive for EPO following their beautiful performances at U23 Cyclocross Worlds, which led to a brotherly domination of the top two steps of the podium.The positives were an outrageous story, absolutely brazen, revolting even. After an understandably irritable first response on Twitter, US cross icon, Adam Myerson, wondered aloud: who was responsible for the drugs? This kind of thing does not happen in a vacuum, especially with riders so young.Indeed. It went even further though, and it goes to show just how fragile a potential world beater's world actually is: 19-year-old, second-place, Kacper, attempted suicide this weekend. It was thanks to the boy's father that he's still alive.I hate doping and dopers just as much as the rest, but something like this just hurts. I hope for the best for the two brothers and hope they can find their way."

Agreed. These are just kids.
Posted by Mark Studnicki at 10:02 AM

First race of the year is always interesting. No exception here. At least the weather was decent, albet brisk, and not much wind to deal with. The Masters race was short, only 3 5-mile laps. That's about 45 minutes. Only 12 guys in our group and that was several age groups combined. First lap rolled along with nothing really happening. Everything stayed together the first time up the hill, just spun up it. On the 2nd lap, on the lower road after crossing the dam, we came across a couple of the cat 5 guys laying in the road. They had went down on their first lap. They were being attended to already, and we were neutralized through the scene and resumed our race. 2nd trip up the hill, I gave it a little big-ring effort. This caused a split. coming across the dam, we could see that the race was being stopped down on the lower road so we just sat up and the group came back together. We arrived at the wreck site to find that the cat 5 field was stopped as the 2 riders were being attended to. Me and the other 11 guys just walked around the scene in the grass and continued on course. We weren't really sure what was going to happen since this was 2 miles before the finish. We sort of rolled up the last hill, somewhat sprinting it out. I really couldn't do much after sitting that long, legs got too heavy. The decision was made to restart the last lap over for all the Masters - in one big group. We rolled on out and across the dam, trying to keep the age groups straight. It was all together with 1km to go. I tried a little move on the run-in before the last right turn onto the climb. It split things up but all of my group was still on my wheel. I led up the climb for a long way but the legs were too loaded-up and the snap wasn't there. I was happy to just get some of the cobwebs blown out.
Posted by Mark Studnicki at 8:12 AM