What's with this crazy heat wave. Wasn't supposed to be 85 today. A bit hot for me to be doing both Masters 35+ and Open Men but what the hell. Ride till you fall over and can't get up. Masters race went well. Not much I can do agaist Jeff Winkler but I stayed close and actually lead briefly on lap 2. He checked out shortly thereafter, so I just went hard enough to keep Brendon Jenks from getting close. It was allredy getting warm so I needed to conserve. The Mens Open race was stacked. I started in the back since I knew I couldn't hold on very long. Got a good start and somehow shot past a bunch of guys and ended up positioned really nice. Riding with some fast guys, I hung on and moved up steadily for the first 1/2 of the race. Then the wheels started to fall off. Once that happens there isn't much to do but stay steady, spin a small gear and keep going. Had a front row seat when Aaron Elwell bunny-hopped the first barrier just to smash into the second one. Total yard sale that I had to run around. The speed he was going and the height that he cleared the first one was a bit more than he needed. The lower back was completely seized going through the sand and over the barriers each lap. I really should work on that. Considering the heat, i probably wouldn't have had a good Mens Open race anyway even if I hadn't done the Masters race earlier. The heat is really been my nemisis the last couple years. Last year at this same race, it was hotter, but I came into it super fit and fresh, and did about the same as I did today. Pretty impressive ride by Jonathon Schottler for 3rd, beating Josh Johnson, Brian Jensen, and Shad Schreiner. Josh did his usual "start slow/finish fast" deal. I think he past me a few laps in. Winkler toughed it out for 7th after beating me in the Masters race earlier. Adam Mills, Andrew Coe, and Tige Lamb folloed in 8th,9th and 10th. I was with those guys till about the 1/2 way point in the race, before the heat and 2nd race of the day shut me down. Bill Marshall stayed steady the whole race for 11th. 12th through 18th all pasted me in the last 4 or 5 laps. Will Gault and Mark Cole got me on the last lap. Mark Cole was working his way up and I was going backwards. He got me over the barriers with about 100yards to go. I was so brain-dead, I was thinking he was in the singles-speed group. What a surprise to see gears on this bike as he passed me. I though about trying to pin the last turn and sprint. Great idea, no legs to make it happen. Definately looking forward to some cooler weather. Not the 10 degree crap, but 30-40 would be nice :-)
Posted by Mark Studnicki at 2:51 PM 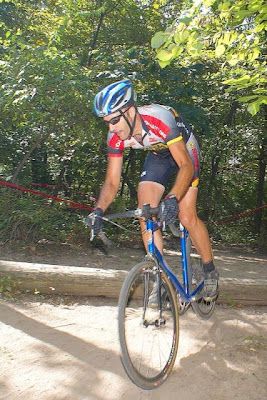 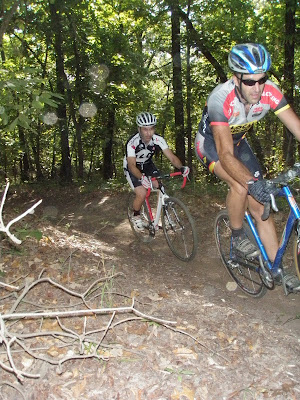 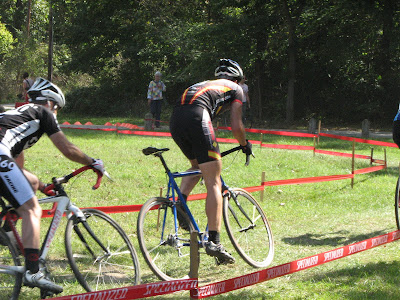 Heartland Sports and Team 360 used every inch of availble ground and put together a super technical course. Only 1 long pavement section to get things wound up. The rest of the course was tight turns with a nice long section of dirt through the trees. Since my MTB form is in it's "off season" already, I decided to double-up Saturday and do both Masters 40-49 and Mens Open, and not do Sunday's mtb race. Warming up before the race, I got stung by a bee that went into my front helmet vent. Did not feel pleasent at all. The masters race was 25 deep with all the usual suspects. The 360 duo of Lucas and Songer and Jeff Winkler, getting in a warm-up race before heading out to the Hermann Night Race. Uphill paved start was a new twist. Never had to start a cross race in my smallest gear before, but it was cool and suited me at least. I got the whole shot easily with Lucas, Winkler and Songer right there. The traffic jam behind really got clogged up and the 4 of us already gone hitting the pavement for the first time. I drilled it on the front for 4 laps trying to brake up the group. Winkler went by me the road and got about a 100ft and stayed there. I still had Lucas on my wheel and Songer was still close enough to keep my interest. I didn't want the 2 360 guys to get together so I kept the pace high enough to get rid of Lucas but I didn't have much to close the gap on Winkler. He could have easily made the gap bigger but put it in cruise control since I wasn't coming back. Ended up 2nd and pretty happy with that. The Mens Open race was small with most guys out in Hermann, but we still had Brian Jenson, Shad Shreiner, Doug Plummer, and Cameron Chambers. I sorta ended up getting the holeshot after Jenson blew the the first turn and headed down the road, and Doug Plummer drifted wide on the first grass turn. Once on the front, I pinned it with everything I had. Shad Shreiner stayed glued right on me for a few laps then took off. I was started to feel the 2nd race in my legs and had to start conserving a bit. Plummer, Chambers, and Andrew Coe were still close but not really gaining ground so I just stayed steady. After Brian Jenson got back on course, he managed to get through the traffic and up into 3rd. He got within about 30 seconds of me but then stayed there for the last 5 laps or so. This course didn't give him any place to really wind it up. I'm sure he made me look silly on the long paved section, but I seemed to be a little faster in all of the tight stuff. Shad checked out and finished a ways ahead, I cruised in for my second 2nd place on the day and Jenson followed in third. I was pretty gassed at the end. I was open to doing the Sunday's mtb race but the legs were not cooperating this morning. Would have loved to race and support the guys buiding those new trails, but the morning HR confirmed I had raced enough for one weekend.
Posted by Mark Studnicki at 12:50 PM

Posted by Mark Studnicki at 4:53 PM

Had 4 perfect days in Tahoe this past weekend. Flew back late last night into the rain, and it's been raining ever since. Friday Krisine and I went out for a boat ride with her parents, Rich and Carol. Scoped out a possible wedding spot. I got out on the bike in the afternoon. Headed up to Squaw Valley and Alpine Meadows. There is an awesome paved-trail network that runs along the West and North shores of the lake with extensions that go up to Squaw Valley. Ran into a bear in the parking lot of Alpine Meadows. Got a picture of it but not with my camera phone so I couldn't twitpic it. Saturday I got out for a long one an rode all the way down the west shore to Sugar Pine Point State Park in Homewood, where the 1960 Olympics nordic ski events were held. Crazy area of interlocking paved and dirt trails. Could have spent all day in there, but I had something else I wanted to see. On the way back up the west shore, I cut off to climb Barker Pass. From the trail map I had, it looked like a 3-4 mile climb, and wasn't very steep so I ripped up that at about 15-20mph. I didn't know the elevation at the "top" so I had no clue. Well, it wasn't just that 3-4 miles. That was just the rode leading to the REAL climb. Obviously the map was not drawn to scale, and about an hour of steady climbing later, 8 miles, and 1500 vertical feet, I reached the top. Most of the 1500 total vertical feet came in the last 4 or 5 miles, since the first half was nothing much at all. Kristine's brother Craig, his wife Kirsten, and there new baby Joss came up for a couple of days. We went to the local pizza place over looking the lake to watch the UCLA and USA soccer games. For my final Tahoe ride, I hit the road for a bit and made it over to Northstar going over Brockway Summit. From there I rode up the dirt service road to the MTB park area and then took another service road further up the mountain. Good climbing but coming back down on the cross bike was a bit sketchy. After dropping back to the main lodge area, I back-tracked on the road to Brockway Summit, where I attempted to pick up the Tahoe Rim Trail. A bit rocky for the cx bike so I jumped on the paved road that goes over past Watson Lake and on to Tahoe City. Time was running out so I dropped down to Watson Lake and then bombed down a jeep trail back to the lake. How I didn't flat 10 times going down that is beyond me! My parents also came up for a couple days. We went out on the boat for a marathon 6 hours on Monday. Serious sun and wind burn.