Rode in 4 out of the 5 days this week. That's 144 commuting miles for the week, in additional to doing the Tuesday Night Lexexa Crit and a hard 'cross workout Thursday nite. Doing the Crit after riding to work and back can be a little ugly at times, but I still stayed in with no problems. A few bone-head moves in front of me caused me to make a few of my own to avoid disaster, so sorry to whomever was half-wheeling me when I had to make the adjustement. The rides into work and home are 55-60 minutes each way and more or less a respectable, steady workout, so they have added to my fitness considerably. I'm up to 56 days so far this year. Throw in my 'cross season specific workouts and i'm very fit, but also getting tired. The MTB is hanging on it's hook in the garage where it should be this time of the year.

I couldn't help but notice that Sram(Truvativ) came out with the Hammerschmidt planetary crank set. Way back in the late '80's, Shimano came out with one but it never seemed to make it into even limited production. Greg Herbold raced DH with one for a while, but other than that, they were never seen. Shimano obviously put the kibash on the the project. I know of a former Shimano employee that helped develop the product still had a working unit well after his days at Shimano came to an end. I actually saw this working unit a few times during my time in the bike industry. My guess is that it finally ended up on the desk of the right person, at the right company. That company being Sram. I remember Sram when they were a very small company making one thing, the original GripShift road shifters. Then along came STI (and Ergo levers for you Campy people), and Sram found itself in a bind. It's mtb Gripshifters were still going strong but the road Gripshifters were on the way out. From a mtb standpoint, Shimano had ruled the "complete groupo" market forever. Suntour was prominent in the late 80's and into the early 90's but is now gone. Sachs was right in there with it's road components and it's mtb offerings were shaping up (more on them later). Campy road components were and still are legendary, but that didn't seem to cross-over to the mtb components they tried to introduce. Fast-forward to today and Sram now makes both complete mtb and road groups that are on-par with Shimano and with Campy's road stuff.

I used to work for Sachs Bicycle Components MANY years ago. Sachs was a German company with it's US office in Socal where I worked. Remember the Sedis MTB chain? Modolo road bars and stems? The New Success road group(with Campy-made ergo levers) and the Quartz MTB components? The Lock-Jaw bottle cage (maybe you should forget that one)? The Huret Jubilee rear derailleur? Sachs was primarily a large automotive parts company (clutches, shocks, ect) until 1980 when it aquired the 3 French bicycle component companies of Huret(deraillers), Atom/Maillard(freewheels, hubs, and pedals), and Sedis(chains). Sram aquired Sachs from Mannesman AG in 1997, making Sram the Worlds 2nd largest bicycle component company, and gave them enormous manufacturing capabilites. Sram would later aquire RockShox, Avid, and Truvativ to round out it's component offerings. The only thing left were complete wheels. that was taken care of when they acquired Zipp!
After my tenure at Sachs, I went on to work for Marzocchi SpA, with it's U.S. office in Big Bear California, later moving to Valencia California. Marzocchi Spa is based in Bolonga Italy and is a huge company, mtb suspension being just a sliver of what they actually do. Marzocchi just recently sold it's entire suspension division (mtb and motorcycle) to the Illinois-based Tennoco, a huge automovive company. Tennoco is reasponsible for such automotive brand names as Monroe, Dynomax, Walker, Rancho, just to name a few. Marzocchi already manufacture the Monroe shocks as well as numerous other automotive products.
Speaking of automotive stuff, after my days with Marzocchi, I went to work for Vince and Joe Granatelli at Paxton Superchargers. Paxton would later get sold to a group of investors (more on that later) that ran it into the ground and it would eventually be bought by Vortech Engineering (as in Vortech superchargers). Ironically, Vortech Engineering was started by a former engineer at Paxton. What goes around..........
I missed most of that drama, as I had already left that company and was now and Answer Products (as in Manitou suspension forks/shocks , Felt frames, Atac bars/stems, ect). Answer was a great sponsor of mine going as far back as my days with Brave Cycles. I returned all those years of support with a win at the Sea Otter Industry Cup.
I would eventually go on to various other career "opportunities" in aerospace, biodegradable food service products, and another automotive company, Advanced Metalforming Technologies. Ironically they made the rotary-forged aluminum wheel blanks that Weld Racing (here in KC) machines into their finished products.
Of course I moved to the KC area in 2004 and the first company i worked for was Machine Laboratory LLC in Lenexa. There's another automotive company here in town, Aeromotive, that make fuel system components. I used to deal with Aeromotive when I worked at Paxton (Aeromotive made all of the Paxton-labled fuel system components). Even more ironic, my I.T. guy at Machine Laboratory used to work for Aeromotive around the same time. go figure.

Now I work at Interconnect Devices, Inc in KCK. This company was recently sold to a group of investors..............
Posted by Mark Studnicki at 8:17 AM 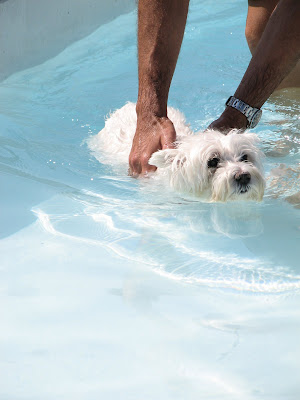 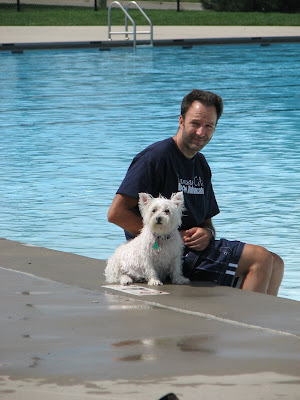 Perfect weather this past weekend. Got in some perfect 'cross training Saturday morning. First ride on the primary race bike (with back up wheels) this year (race wheels are still aging in a cool dark place). Had a few of the normal bugs to work out but now it's 100% ready. Took Louise (the cute white dog) to the Lexexa Dog Swim at the Ad Astra Pool. She did great. Not a real big swimmer. She just sorta floats around.
After the dog swim, it was time for 'cross session #2. Had another good hard session followed up with 5 tough run-ups.

Later that afternoon, I decided to take Kristine out the the new Lake Lenexa/Blackfoot Park. I've been riding thought there since last year but she'd hadn't seen it yet. Perfect weather for a perfect walk in the park. 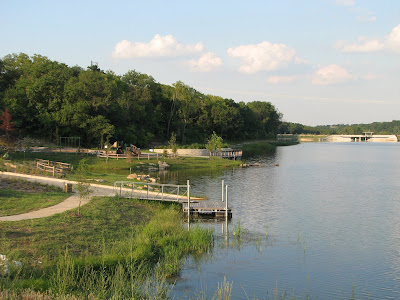 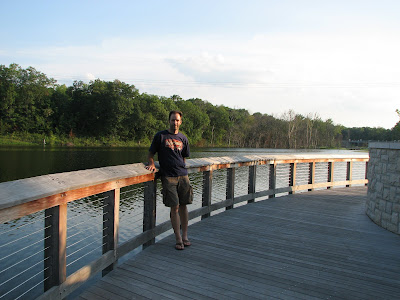 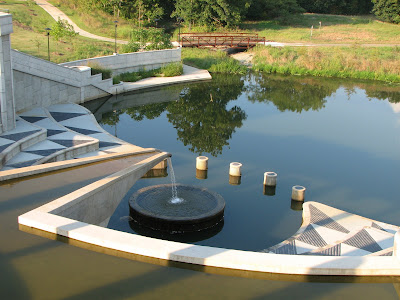 Posted by Mark Studnicki at 5:34 PM

Update for the Week

1,760 miles! That's what riding to work and back (36 mile round trip) 48 times so far this year gets ya. That's almost 6 tanks of gas at $50-$55 per tank or about $300 total (almost enough for that new Niner EMD 29er frame). Got in 3 days this week: Monday, Wednesday, and today(Friday). Monday was HOT. I knew I was in trouble when it was about 84 degrees on the way in at 7:30am. The trip home started at 4:30pm, 97 degrees. I'm sure it got hotter over the next hour as I went from one drinking fountain to the next coming down the Mill Creek paved trail. By the time I got home, I was DONE. Fortunately the heat wave came to an end and Wednesday wasn't that bad and today was about the same. I'm looking forward to the cooler weather.
Posted by Mark Studnicki at 1:15 PM

Artist of the Week - Buckethead

I have to admit, I didn't really know much about this guy. I'd seem him on the occasional live show as a guest guitarist, but other than that, I just thought he was a novelty heavy-metal thrash axe man. Well, when i'm wrong, I say i'm wrong. He is a very gifted composer and musician. If you get chance, check out his Wiki page. The KFC bucket, mask, and long-hair wig are more than just a novelty here. It's almost meant as a deliberate distraction. Most great guitarists overload your senses with flashy clothes, painful facial expressions, and they run all over the stage twisting into all kinds of weird yoga positions. Aside from the occasional break dance or nun-chuck routine on stage, once Buckethead (real name Brian Carrol)pics up the guitar, everything is played almost completely dead-pan. It's all about the music, there's nothing else going on. Brilliant if you ask me. Him catalog of music is VAST. He had been called the #8 Top Guitarist of all time and if you listen to his stuff, you'll hear why. He has a mystique about him: There are no known pictures of him (aside from an old yearbook pic)without the trademark KFC bucket, mask, and dark-grey painters outfit. I have played guitar for years, and i have developed a 6th sence when it comes to listening to other players. I'm convinced the mask limits his view of his guitar, and like any real guitar virtuoso, he only has to feel it. His diverse range of playing covers the heaviest thrash metal to the most etherial acoustic compositions. He has incredibly long fingers which enable him to construct chords that are just crazy difficult. An example of this starts at 4:15 in the first video below. Most human beings would single-finger pick that.

Posted by Mark Studnicki at 6:06 PM