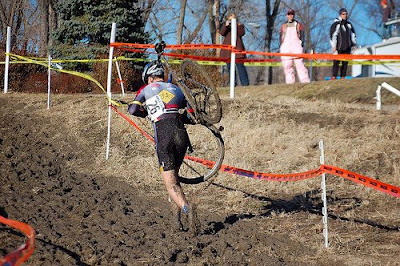 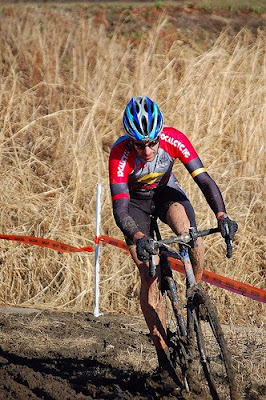 Global warming my ass. Way to cold (for me) to ride outdoors. I tend to not plan time off during the winter. I just let the weather tell me when to do it. Last week was it. I was wrecked after Nationals and needed a physical and mental break. The weather last week was crap. I don't mind riding in the cold, but riding on ice is not much fun. Last year at this time, I was riding everynight REGARDLESS, and I definatly rode in weather that was JPS (just plain stupid). I figured after taking Monday thru Thursday of last week off, I was ready for a spin outdoors Friday after work. It wasn't all that cold, still below freezing but mid-to-upper 20's at least. Roads were clear (thanks to the salt) but the sidewalks, paved bike trails, and anything that had snow on it earlier in the week, was now melted and re-froze. The worst. Managed to get out to Lake Lenexa, but the loop around the lake wasn't very do-able. I then proceeded to head out to Shawnee Mission Park. the paved trail heading out there was all frozen up. Finally got out there, went about 2 foot into the trail and fell over. I think I put both feet on the pedals and went to actually start pedaling but the bike stalled on a rock or something, bars turned, still clipped in, and over I went. Definatelly ranks pretty high up on "the list" (...of the most stupid things ever down on a bike). Thought for sure my left arm and hand were broke since I landed in a pile of rocks. I was finally able to get up and take inventory. Nothing broke that I know of, in my arm anyway. My left hand has a wicked bruise on it and my shoulder got tweeked. Planning on staying on the rollers until the weather gets better (ie all the ice is gone and NOT in the single digits).
Posted by Mark Studnicki at 8:58 AM 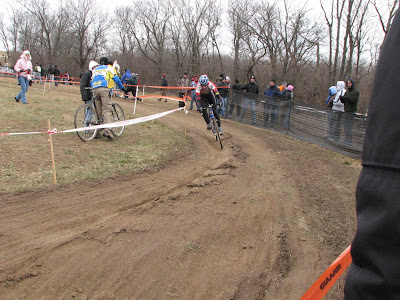 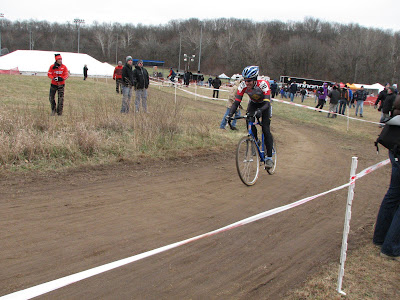 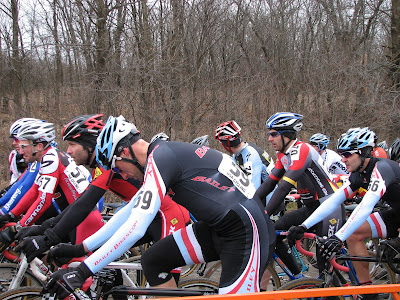 72nd, 4 laps down. Not quite as good as my 41st and 1lap down from last year. It was $%#%#$ cold and windy and hell. It was 60 degrees in the morning when I loaded up my truck and about 30 when I got to the race site. Not sure how low the temp actually got during the race, but the wind chill was pure brutality. I was just too cold and never really got a good warm up before the race to do anything.
I got a good start in the race but the pace up the hill the first time was insane. Traffic jams and crashes in every turn. One guys front wheel came off and he almost took me down running back to get it. When Trebon went by me climbing up the hill, he was going at least double my speed. The officials never really pulled lapped riders. The only thing I every saw was the finish line official making a throat-slitting motion. I did at least 3 more laps than I needed to, but I was never sure. Last year the officials litteraly came out on course and directed you off. I pulled off the course right after the finish line and Trebon won about 30 seconds later. My legs were still dead from the Masters race yesterday. If I ever race Nationals again (unlikely unless they are back in KC) I need to just focus on the Masters race. I'll leave the Elite race to those that don't have 9 to 5's
Posted by Mark Studnicki at 5:07 PM

Went OK for the most part. Got called up in 53rd, 6th row. In several earlier races, there were crashes down the paved start so I made sure not to get involved in that. I stayed out of trouble down the road, and got be a few guys in the process. Hitting the grass, everybody dove into the first turn then drifted left along the tape and got all clogged up. I saw this happen in every other race, so I went inside, cut hard to the right and rode right past about 20 guys up that first hill. Settled in to 16th and just tried to stay in a good tempo. The course conditions were perfect and the weather was great, aside from some nasty wind. I manged to hang in in the top 20 for most of the race, but the legs got heavy towards the end. Me and Jeff Winkler stayed together for most of the race and I managed to hold him off for 24th place and the first Kansas/Missouri/Nebraska/Iowa guy. The entire course had perfect traction, a bit slick in just a few spots. At the very top of the course there was a short run-up with a tricky down and up section right after it. I rode it a few times in practice but decided to run it during the race. Seemed about the same either way. I didn't want to risk riding it, and screwing it up. The whole atmosphere at the race was awesome. With the weather much better than last year, tons of spectators were out screaming and yelling. BUT...... The weather is supposed to take a nosedive at some point Sunday afternoon, right around the the time I start the Elite race. It's predicted to be around 60 before this happens, and in the single digits late Sunday nite with snow, freezing drizzle, more wind. Kansas Weather: We couldn't make this shit up. The weather has been bouncing all the place for the last few weeks. In fact, in just the last week, we've seen it all.
Ran into a friend of mine from WAAAAAAAAY back in the late 80's. Walt Axthelm won the 70+ Masters race earlier in the week and I saw his name on the results. During my race today I saw him cheering us on. I went by once and said "hey Walt", but he didn't know it was me. So after the race I rode back up there and we got caught up on what's been going on. I used to ride mtb's with him and we traveled together a few times back in SoCal. I moved a few times and eventualy lost contract. I saw he came out to last years nationals but I never could track him down. He now lives in Durango and is good friends with Chris Herting of 3D Racing, the guys that made my frames. Great guy and still strong on any bike. Tomorrow is his 75th birthday.
Also got to catch up on old times with Mark Noble. He got 2nd behind Tilford in that Masters race. Mark and I used to race mtb's on the same team, Brave Cycles, back in the early '90's. His son Chance also races and is super fast as well. We used to live near each other in SoCal and did all of the same group rides.
Saw 2 guys in my race today that i used to race BMX with back Michigan around '85/'87. Rob Foshag and Jeff Weinert are both fast 'crossers from Michigan, Jeff got 10th and Rob 12th.
Posted by Mark Studnicki at 6:23 PM