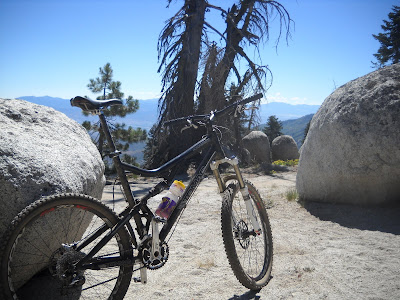 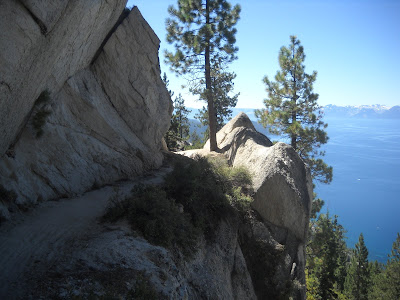 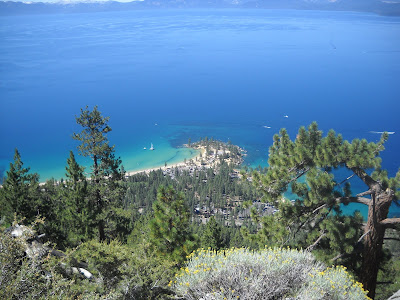 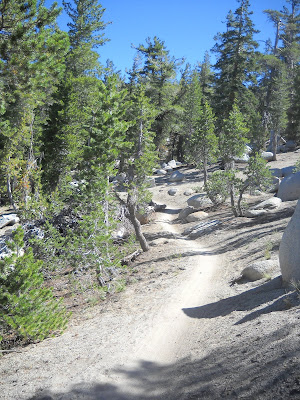 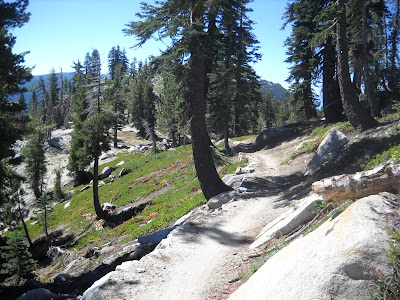 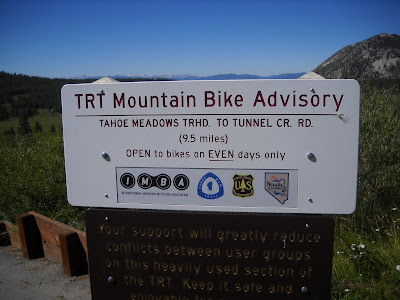 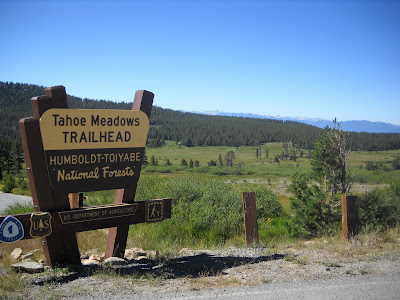 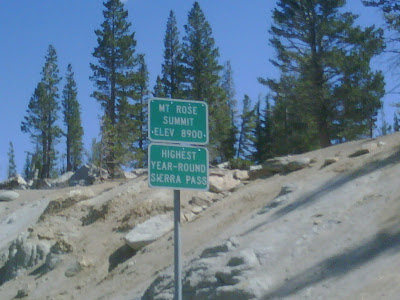 Spent another amazing weekend in Lake Tahoe. Got out on Saturday with an old MTB buddy from way back Mark Roberts. We had an epic battle in the mens sport class at the '88 MTB World Championships in Mammoth Lakes. He's basically a Tahoe local so he knows the trails there like the back of his hand. He took me on a bunch of stuff I hadn't seen before north of Tahoe City. We got in a solid 3hrs of singletrack with another hr of misc pavement at the end riding back from Squaw to Tahoe City and I got in another hr riding before/after for about 5 on the day. I had brought my road bike up with the intension of doing a lap of the lake on Sunday. Given the amount of traffic up there this weekend, I chose to stay off-road (mostly). Did the ever-popular Tahoe Rim Trail from the Rose Summit/Tahoe Meadows trail head to Tunnel Creek, then took the Flume Trail south to Marlette Lake and back, then Tunnel Creek down into Incline Village. Amazing single track with spectacular views of the lake from mostly above 8000 ft. This is one of the most popular "shuttle" rides in the area. Must have been 50 vehicles at the Mt. Rose Summit trailhead and another 40 at the bottem to take riders back up. It's only an 8.5 mile/2800 vertical feet road climb between the two. I started in Carnelian Bay (north shore) and rode the 8 miles over the Incline Village, NV. Then did the 8.5 mile road climb (averages 5.5 %) to the 8900 feet Mt. Rose Summit. The Rim Trail starts just below the summit at Tahoe Meadows. This section of the Rim Trail climbs up a few 100 feet in the first mile or 2, then gets super fun and flowy for the next 8 miles or so to Tunnel Creek rd. A quick descent down Tunnel Creek brings you to the north end of the Flume Trail. Took that south to Marlette Lake. Super fun single-track trail with some cool sections cut into the rock. Lake Tahoe is on your right, and straight down. This secion of the Flume is almost completely flat so it was mosly big-ring seated stuff. I turned around at Marlette Lake and rode came back to Tunnel Creek Rd, which was a wide dirt road downhill all the way down to Incline Village. Mostly deep powdery sand so i'd hate to climb up this way. Once back in Incline, it was a rolling paved ride back to Carnelian Bay. Ended up just under 5hrs total, 27 total paved miles and 22 dirt miles. Close to 10hrs of mtb riding over two days. Feeling it today for sure. Pics coming.

I had this race on the schedule for a while but sorta waited till the eleveth hour to make the commitment. Angwin is just north of Napa Valley, so it's a beautiful area. The race was 3 laps of a 10-mile loop. 30 miles off-road is a solid effort no matter how hard the terrain is. Couldn't preride much of the course since it went out a few miles before hitting the actual loop, so I only saw the first 1/2 mile and last half mile. The start was on pavement, uphill, to a wide gravel path and eventually onto some dirt roads. I sorta assumed that single track was out there somewhere beyond where I prerode so I attempted to get a good start. The lack of proper warm-up combined with NOT having down a hard start like that in a while KILLED me. I hit the dirt in 4th with completely gassed with ruined legs. I lot of guys blew by me while I tried to re-start the system. Took a few minutes and a good 1/2 mile but I "seemed" to be going good. Started catching back up to the guys that killed me off the start and actually started catching riders from the wave 2min ahead. The course was all dirt roads for at least the first full mile or 2 before hitting singletrack. The singletrack was supper fun and technical. I had never ridden this stuff before but I was at least staying with the guys in front. Got by a couple guys and seems to check out a bit. I was catching guys and the guys I passed seemed to fall away. The course alternated between single track and wide open dirt stuff. All middle-ring climbing until we hit the BIG ONE. 1/8 mile granny gear climb straight up. I generally don't do well on these but I caught back on to the front group the first time up this. Over the top they got a little gap on me again. The course rolled along some more with fun singletrack and middle-ring climbs. Towards the end of the lap was a 3 pack of rollers. Each had a crazy rocky ledge sections leading down so you couldn't hit the uphill part with much speed. Each uphill was middle-ring 'able but definately a handfull to clean. By the 3rd one I was wrecked. Some fun fast rolling stuff finished out the lap. This is around the time I decided that that only way I was going to make it 2 more times around that thing was to put it into conservation mode. Still rode hard and agressive but couldn't do much more than that without risking a DNF.
Got caught by a lot of guys as expected, not sure which were in my age group or not. That 3rd lap was a killer for sure but managed to keep it together and at least finish. Had this been an 1:45 or 2 hour race, I think I could have faked it along better, but 2.5 hours is a bit different. Didn't quite have the breakfast for it. The race was held at a college so we could use the showers in the gym after the race. That is a huge luxary since Kristine and I were planning on wine tasting in Napa after the race. Not sure what place I got since they hadn't posted results when we left. Wasn't top 3. Did win a WTB Mutanorapter 2.4 tire in the raffle so that was nice. No, a 2.4 tire isn't exactly a cross-country race tire, but it will work perfectly for the majority of the stuff i'm doing. Having not raced much over the last year definately became obvious yesterday but that's how it goes. I get in plenty of riding. Good riding, solid efforts both mtb and road, but no amount of hard training can replace actual race efforts. Other than that, the Tomac bike worked flawlessly. A bit more bike than a lot of guys were on out there. If I was really serious about getting back on the podium at every race, i'd probably do a more race-specific bike, but I like a bike I can go beat up in Tahoe without getting destroying or beating me up. I've got that so i'll leave the podium spots to those guys that are simple WAY faster than me for now.
Posted by Mark Studnicki at 8:35 AM