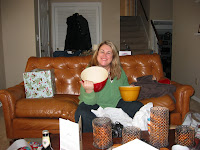 Me and Kristine spent our first Christmas Day quietly at home. We both got plenty of great stuff. She must have read my mind (or my Ebay watching list) and got me a new pair of Pearl Izumi cold-weather gloves. I've been using the same pair of PI Pittards Fleece gloves that I got from Pearl direct on an employee purchase deal when I worked at Answer - a long time ago let just say. After opening all the presents, I convinced Kristine in allowing me to go for a quick ride. Perfect weather, about 40 something. No leggings and no gloves for the first time in a while. I needed to burn some calories before our big Christmas feast.
Posted by Mark Studnicki at 10:08 AM

I used to go FAST on this bike? 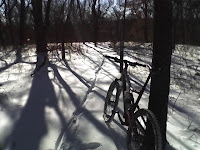 After ripping around on sub-18lb 'cross bikes for 4 months, it's time to get the MTB back out and attempt to ride that thing. MTB is still my "bread 'n butter" bike, but it takes a few rides to get it re-figured out. The very-rocky trails at my local ride spot are challenging to begin with. Combine that with not being "one" with the bike AND a fresh layer of snow makes for a big meatball sundae. I have over 2 months to get all the cobwebs out before the first mtb so i'm not too concerned.
Posted by Mark Studnicki at 10:35 AM 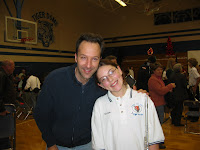 With all (or at least 90%) of the craziness out of the way and the bad weather settling in, it's time to start enjoying my LIFE OFF THE BIKE. Went to Quinn's band concert at school the other nite. Not hearing her practice her flute everyday, I didn't realized how good she was. New school for her this year. She's doing OK in school, although old habits die hard, like forgetting to turn the work in. She's in 8th grade now so everything will start to count towards college next year.
Posted by Mark Studnicki at 10:27 AM 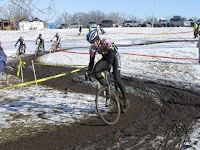 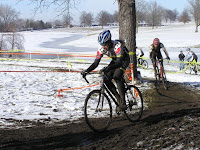 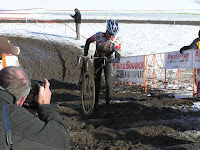 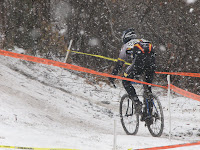 COLD, COLD, COLD. The temps were in the high teens, and the ground covered some fresh frizal (that's freezing drizzle). The paved sections of the course had to be taken out since they were like ice rinks. The rest of the course was acutally fun and challenging. The "run up" was actually ridable for all the guys in my 1/2/3 race. The turnout was rather small with only 4 guys braving the elements. Shadd Smith and Cameron Chambers set the early pace with me pulling up the rear and not doing very good at it. I kept Cameron close for the first half of the race but faded from that point on. The only other guy in the race, Joseph Smaltz, was no where close behind me so it was just a solo training ride for the last 25 or so minutes. I never did feel my toes the whole race, or for about 30 minutes after the race. Thankfully the race venue (a high school) hot showers available so I rode straight from the finish line to the showers to unthaw. Kristine bundled up and braved the weather and got some great pics. She had my street cloths and towel waiting for me as I ran to the showers. Right now, it's super cold out here but it's supposed to warm up before Nationals next weekend so that course could turn into a real mess.
Posted by Mark Studnicki at 5:01 PM

Spent the weekend in SoCal with Kristines family to watch the big UCLA vs USC game, drink plenty of beer, and exchange some early x-mas gifts. Heading for the airport right after work on Friday. Southwest Airlines is always a comedy show with wings and this time was no exception. Any plain heading for Vegas (we though though Vegas on the way to the O.C.) on a Friday night is bound to have a few drunks or people trying to get drunk. The row in front of us had 3 girls heading out to LV for a bachorlette party. The Plane left KC about 30 minutes late due to bad weather in Vegas. No big deal if we were only going to Vegas, but we had a catch the connecting flight (more on that one below). The 3 stewardess's (2 chicks and 1 dude) offered a free drink to any passenger that could guess their combined age. After about 30 minutes, they came though the cabin and wrote everybodies guess down. After reviewing the results, they announced that only 1 person on the whole plane guessed the right answer: Row 9, on the right-side of the plane, in the middle seat? Since it's Southwest, nobody know's what row their in so everybody starts looking around and eventually everybody is looking at me :-) YEP, I got it. I free Heini ! Know the rest of the story about our connecting flight. Since we left KC 30 minutes late and only had a 1 hr layover in LV, we had to hussle to out next gate. We look on the Departures board and it isn't even listed. Uh Oh. Some random guy laying on the floor under the departures board pipes in: "you lookin for Orange County, it hasn't been up there in hours, don't know when it's leaving.............". Great! We find a Southwest person that directed us to a gate. We get there and find out that 2 different planes are coming in to that gate and depending on which one gets there first, that will determine the next flight leaving that gate. Fortunately, the right plane made it first and we were soon (albeit about an hour late) on our way to Orange County. Saturday was spent tail-gating (on the couch) and eventually watching USC give the Bruins a beating. X-mas gift exchange and a fantastic prime-rib dinner ended the evening. Sunday was spent walking the 2 dogs (Kona and Sammy) up at the Huntington Beach off-leash area. After that it was back to the airport for the flight back to the cold crisp air of KC. Now i'm at work, falling asleep 'cause I hit the pillow at 2am this morning and up at 6.
Posted by Mark Studnicki at 10:33 AM