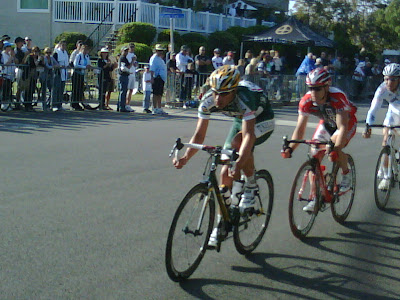 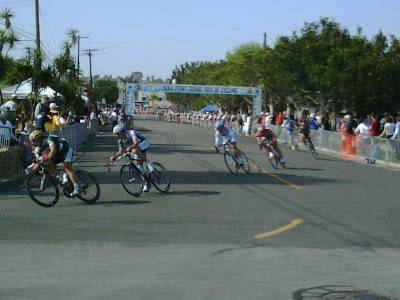 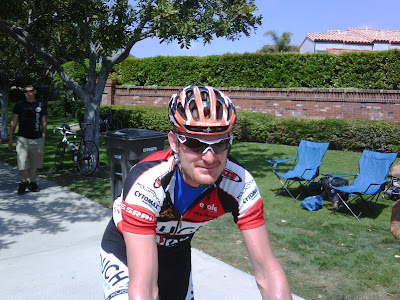 Spent the weekend in California relaxing with family and enjoying some perfect beach weather.

Any trip back to California has to start with a stop a Baja Fresh. When I first moved to the Kansas City area in 2004, there were 2 of them still here. Why they left is beyond me. We spent the day at beach, went out to Balboa Island, then headed to Kristine's Sister Michelle and Brother-in-Law Brad's house. Sunday we headed down to Dana Point for brunch at the harbor, then over the the Dana Point GP venue. Gorgeous area over-looking the ocean. Great family atmosphere and the Michelle 2 little ones had all kinds of fun.
Posted by Mark Studnicki at 8:13 AM

After last weeks emotional car bomb seem to blow both legs off, it was a challenge to get them fired back up. Had a great group of people over on Sunday for some burgers, beer, and hotdogs. Finally turning 40 was sort off anticlimactic, since I've felt about 45 since last fall. Tuesday Nights Crit was fast but a little sketchy. I had no problem sitting it but bugged out with 3 to go. Legs were a bit heavy still after riding to work and back. I accomplished my workout and didn't need to see any more bar banging. Me and a couple other guys hung around and jumped in the B race to help it flow better and stay together. We patrolled around the group and tried to keep things more organized and helped draft some dropped riders back into the group. Mission accomplished as the group was almost intact for the sprint. Wednesday's hill ride wasn't too bad. I "managed" to stay in the front group all the way till my turn off at Woodland and Praire Star. I use the word "managed" loosly here 'cause it wasn't very pretty. I kept getting popped out of good position, then had to fight back on. Did this once on the first climb and twice on Renner. The Woodland climb stayed together all the way up till about 100feet before the top, then I was cooked and the anchor came out. Had visions of finally hitting some trails tonite but then woke up to some impressive rain this morning. The rain actually woke ME up. So much for riding off-road. Might as well hang that bike up. Heading to SoCal this weekend to see family. Watching the Dana Point Gran Prix on Sunday. Should be a good show with Floyd Landis there and most of the domestic Pro guys there. Italy trip is getting close. 4 weeks and counting.
Posted by Mark Studnicki at 7:06 AM 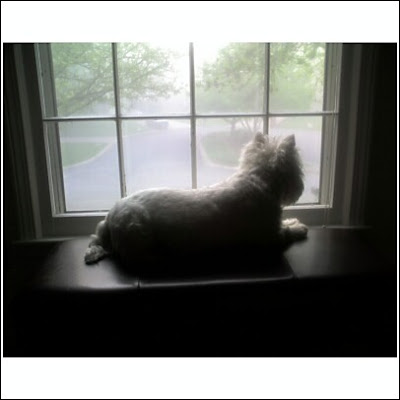 I miss my little white dog
I miss my friend….
Posted by Mark Studnicki at 9:57 AM

As I watch the pouring rain and hail build up on my deck, I'm so glad I hit the trails for a hour tonite before this crap blew in. Trails at SMP were BONE DRY and gates still closed. I'm in good shape right now, not great, but the lack off off-road riding really hurts the technical skills. The Bonebender 3/6hr race is coming up. Could be my last mtb race of the year. Heading out to sunny SoCal in a couple weeks to celebrate my big 40th birthday with family, both mine and Kristines. My beloved little white dog Louis gave us a little scare. She broke off a tooth so we got her antibiotics just incase. She seemed to really slow down and we feared the worst. We've since taking her off those and she's starting to perk up again. We're hoping she just had a bad reaction to the meds and she'll be back to her fiesty self in no time.
Posted by Mark Studnicki at 6:17 PM

Good week of riding so far. Up and down weather as usually. Sunday cold and rainy, Monday just plain cold, but got out and did about an hour on the cx bike at Lake Lenexa. Tuesday's Crit went OK. Warm and not so windy so everything stayed together. Managed something around 10th in the sprint, which I rarely ever go for, but I found myself too close to the front to peel off and get out of the way safely. Wednesday was gorgeous so I decided to ride in the work. 18 miles in about 50 minutes. Only my 4th commute this year so i'm behind last years pace by quite a bit. the ride home in the afternoon was tough. I was just tired and didn't have any snap. the steep climb on Renner south of Holiday sucks as did the the long climb south of Midland. Of course the the climb on Woodland to my house wasn't fun either. Got home just before 5pm, grabbed some food, then headed back out for the 45minute ride over to the start of the Wed Hill Ride. I was feeling pretty stale by now but what the heck, it's just training. Sometimes I can ride through feeling crappy and sometimes I can't. Once the ride got going, the legs just turned into dead wood. I tried to go at the bottom of Lawrence Hill but came to grief rather quickly. That was it and the rest of the ride was just miserable. I've done the commute to work and then did the Tuesday night crit many times but trying the Hill Ride was too much. I ended up have just under 4hrs in the legs by the time I got home. It's good to stress the body like that periodically. With the rain coming today and Friday, i'll get a good rest period and come back feeling great.
Posted by Mark Studnicki at 6:30 AM

Another Tuesday Night Crit - Another kick in the face!

In years past, I've always have 3-6 mtb races in the legs by now, and a whole lot of MTB training that comes with that. Since MTB racing (& the training for it) make up about 90% of my overall fitness, it's no surprise why i'm not exactly flying on the pavement right now. My off-road form is OK right now, but not even close to 100% given the zero race schedule. I can do all the paved "junk" miles I can stand, but that really doesn't do much for me. Contrary to some popular opinions, riding road doesn't make you fast off-road. Last night's crit was another windy-as-hell 45 minutes. I managed better than the week before but still sat out 1 lap around mid race to nurse a leg cramp. Never really did much expect stay in the right place to avoid the wind. Few more weeks, I should be back out there on the cross bike, and probably going better. I'm only doing the Tuesday crits to keep some high-end over the Spring/Summer for cross season. The Wednesday night hill ride tonite was a good one. Plenty of fast guys. The roll out was nice and brisk. I managed to hang near the front on the first climb till the top when I got gapped a bit. Shad Shreiner went pretty hard near the top and we got an lead group established. The Renner climb was a bit more subdued, with just a few little digs towards the top. The lead group slip in two over the top and somehow I stayed in the front one. I did get spit out briefly along Renner but I got back in with the help of some 360 guys that were popped on the Renner climb. We were all together up Woodland and I managed to stay near the front, till Shad went near the top. I didn't have much left after that.
Posted by Mark Studnicki at 10:19 AM