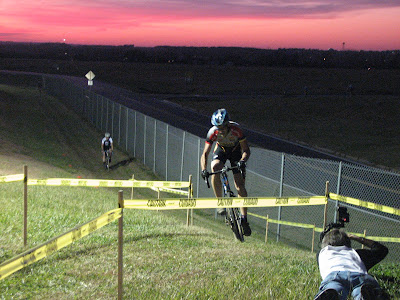 Night racing can be pretty interesting. Starting a race at 5pm when it's still light and finishing 40+ minutes later when it's dark is even more interesting. The fading light made it hard to focus, but once it was completely dark and the lights of the Heartland Park race track were on, if was pretty cool. The dirt track and
infield was a bit green during the preriding. The track hadn't been used in months. A bit bumpy in spots but everything smoothed our considerably during the night. A tight little s-turn right after the start on just before the entrance to the track kept the entrance speed down. However, that speed quickly built up with a long flat drag to the first 180 turn and back. The the infield minefield consisting of some tricky bumpy turns. Back onto the dirt track for one last stint of speed before a very trick, and aukward stair run-up and quick remount before dropping down outside of the dirt track. A quick climb back up the start area, another stair run-up right before the finish. I got to the start a bit later than usually and sorta had to weasle my way into the front row. Both Andy Lucas and Steve Songer got off the line first and up the first grass hill. I rode the course tape a bit and got passed Steve, then dropped in on Andy going into the little chicane. Once in the lead, I tried to pin it on the dirt track. Steve and Andy stayed glued on my wheel. The infield was tricky and definately easier to be leading and picking my own lines. Me, Steve, and Andy basically stayed together for the first lap. Andy fell away but Steve stayed right on me and definately had my attention. With no real hills to speak off, I had to figure out where to get time on him. Leaving the dirt track, there was the tricky turn with the run up to the stairs, with the re-mount on top then a quick plunge down the other side with a sharp left turn. I noticed I could re-mount and make the quick turn a little better, so I started to pin that section and the following grass section with the climb at the very end. From there, I needed to recover a bit through the start-finish area. The little grass climb just off the start was another place I could get a second or 2 each lap. Once back onto the dirt track, I just eased up and tried to freshen up. Steve would close in here every lap. This pattern went on for about 30 minutes. Fortunately I could get a couple more seconds each lap on the sections I was faster on that he could get me back on during the track and infield section. The un-seasonably warm air made the throat pretty dry and sore by the end but I hung on for the Masters 40+ win with Steve right behind me and Andy Lucas coming back from an early crash to get 3rd. Hung out and watched part of the open race. Those buys were flying. With a race the following morning, couldn't stick around for the finish.