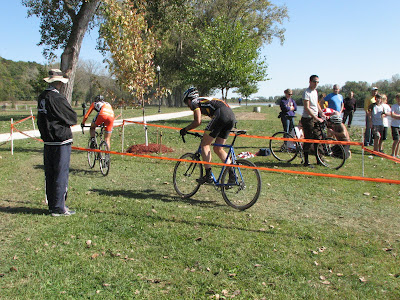 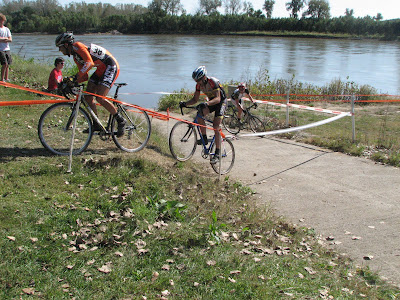 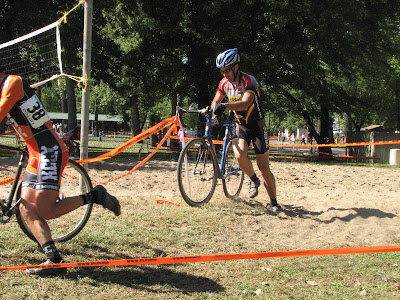 Ouch. Not sure what feels worse: Racing twice in one day or 2 days in a row. My lower back was welded together when I woke up this morning. Kristine took a hammer and chisel to it and a generous slathering of Tiger Balm got me to the start line. Another stacked field. Mostly the same as yesterday with the addition of Shadd Smith. I took the start a bit easier today, letting the fast guys go first. I slotted in around 10th maybe and just tried to follow some fast wheels without getting gassed too early. Ended up in a 3 way battle with Adam Mills and Cameron Chambers for a while. Both eventually dropped me so I was on my own with about 6 to go. A hard charging Andrew Coe was steadily moving up behind me, gaining a few seconds each lap. I eventually caught back up to Cameron and dropped him, but then Andrew caught him and both seemed to start coming back on the bell lap. Just as both of them caught me at the barriers, Andrew attacked and I got on his wheel and Cameron seemed to be cooked. I stayed glued to Andrew, hoping to get him back somewhere. During all of this, the gap up to Mills was coming down pretty fast. Andrew bobbled a bit in the last sand pit and I squirted by. Ended up being some sort of mechanical for him. Cameron wasn't that far back so I couldn't relax just yet. I think I ended up around 12th or 13th. Not sure. The reversed direction of the course seemed to flow nice. Definately a bit warmer today. Had a few close calls with people walking on or across the course. I think for next year, they need to keep the race confined to one area of that park so that people that want to use the park, walk the trail, their dogs, ect, don't have to cross the course in 10 different spots, or walk right down the course during the race. Just a thought.
Posted by Mark Studnicki at 4:41 PM