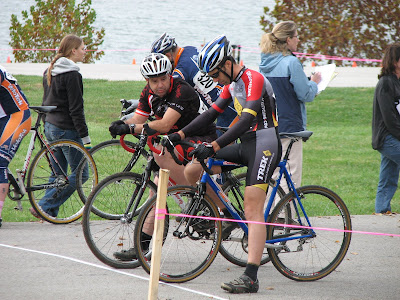 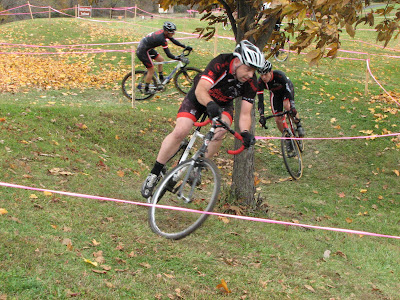 Perfect weather and great location. I spent a few hours on Saturday helping Chris and the crew lay out the course and pound some stakes. To keep things interesting, I made a slight alteration to the original course. Shortly after coming off the start road onto the grass, I added a tight little chicane around a tree by the bathrooms. Apparently the opinions varied. I wasn't in the parking lot for 2 minutes before I heard the first one. The course featured some cool stuff. The beach section was originally intended to be a run, but everybody was riding it. The run-up near the end of the lap was ridable but sketchy. The Masters 35+ race went off and I got the holeshot with teammate Joe Houston and Doug Plummer right on me. One I got the holeshot, I cruized the first tight grass section, then opened it up once we hit the paved bike path section. I kept the first lap a bit exilerating since I wanted to lead through the beach and not get tangled up. The steps exiting out of the beach that me and the crew cut in worked perfectly. After that, there was one good climb on the course leading up the the awards area. I could really get on it here and keep the pressure on. Over the top and spun a bit through the trees, by the wheel pit and back down towards the paved bike path. The hard right turn off the grass onto the paved bike path caught a few people (more on the later). Brief paved section with a hill, then the run-up and money tree, and finish line. Managed to get $3 during the Masters race. Some guys were riding the run-up but I played it safe and ran it every lap. Since I was doing the Open race later, once I got a descent gap on Plummer in 2nd, I started to ease up and spin the legs out a bit. Held on for the win with Doug Plummer in 2nd and teamate Larry Smith in 3rd. Open race had some good fire power with Shadd Smith, Shad Shreiner, Jeff Winkler, Aaron Elwell, Cam Chambers. Plan was to get a good start then try to settle in and not kill myself in the first 30 minutes. The worked and I got into the grass behind the 2 Shadds. Winkler got by and made his way to the front. Me, Cameron and Elwell had some good battles for a while. The beach section was destroyed but the exit was now ridable. The runup that I ran in the masters race was a lot better so I rode it every lap. At some point in the race Shadd Smith had a comfortable lead, then crashed pretty hard. He needed a new bike so it took him a while to get to the pit. Later he ate it again on the nasty right turn off the grass onto the paved bike path. Not a good day for him from the looks of that knot on the head. Winkler took the win with Shad Shreiner in 2nd. Shadd Smith held on for a hard earned 3rd. Me and Aaron Elwell were battling for 4th for a while. I went by him once and he looked blown up, but came on later and got by me and took off. Cameron was close behind me for a while but faded. Andrew Coe (very fast as of late) had a bad day was a ways back for most of the race. He came on with about 2 to go so I couldn't just roll the last lap. Held on for 5th. Great race and an awesome venue. That shower after the race made a world of difference. I was in there about 3 minutes after I crossed the line. The afternoons rain came like clockwork, right at 3pm.

Posted by Mark Studnicki at 3:23 PM