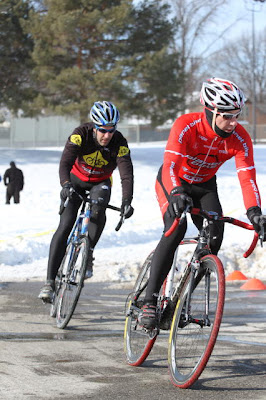 Wow. What a day. With all the snow we had, it took a lot a people and a whole lot of time to get the course cleared and in some kind off shape to race on. The City of Shawnee provided a Bobcat and several people to do 80% of the work on Friday. I went out on Saturday to help out and put the final touches on a few sections. After working for a while, everybody did laps for an hour or so to get some lines established. The forecast for Sunday was for bitter cold in the morning but up into the twenties by noon. That meant hard and icy (but fast) early, and slushy later on. Most of the course had 1 perfect racing line about 12" wide, some sections had 2, pretty much where the Bobcat tracks were. As long as you stayed right on the main racing line (or the other if it was there), you could actually haul ass, but you get off that and it would bring you to a dead stop, either right in the middle of the course or over a snow bankd and off in the 2 foot deep powder on the other side. No need for much course tape since you couldn't go anyway the Bobcake didn't clear. My Masters 40+ race was the first go go off at 11am and it was still in the single digits. The course was rock hard and fast, provided you stayed on line. Off the start, I immediately pulled my left foot out of the pedal. Hadn't done that in a while. The paved start hill was pretty short so I didn't have much time to move back up before hitting the tricky left turn off the pavement. I did manage to cut off a few guys and was somewhere around 10th coming down the first single file section by the wheel pit. This is where it split into a left and right line. I went right and caught a rut which shot me straight into the 3foot pile of snow along the course. I lauched over the bars and disapeared into a cloud of while powder. My helmet and face were completely packed with snow and my gloves covered. I scamptered back onto the course and ended up completely screwing a few of the 50+ masters that started 10 seconds behind us. I was not only dead last in my race but I was back in the 50+ field. It took a while to get back going and up the tricky section by the tennis courts. Once up that section and around the tree, the course splits in 2 fast lines and I could start moving up. At this point, I was already 30 seconds + behind the leaders. My teammates Josh Taylor and Joe Houston got the holeshot, and rode the first section perfectly and were already a couple straight-aways ahead. I was in serious panic mode at this point. I got by a few guys on the first lap and noticed that I was coming up on Steve Songer and Andy Lucas. Fortunately for me, they didn't get great starts either and were still working through traffic. If they had, they would have been gone. I was definately getting winded chasing back up so hard. About 1/2 way through the race, I managed to get up to Josh with Lucas right behind me. Right after I got into the lead, I did another high-speed snow explosion. This time my chain came off which took some time getting back on. Andy got back by me, so it was back into panic chase mode...AGAIN. I was pushing it pretty hard, which made up time on some parts of the course, but definately caused some catastrophic moments that were counter-productive. Ultimately the fastest laps were the ones where I didn't push it as hard and as a result were error free.

I have to apologize to the girl that was on course that I did a perfect hockey check on . She had taken the low line off of the run-up/ride-up, and I was coming fast on the upper high line. Right before I passed her, she hooked up and came up and onto the higher line, and I just flat-out nailed her. She didn't go down fortunately but i sure hope she's not hurt.
With a few laps to go, I clawed my way back up to Josh and Andy. We all made numerous passes for the lead and we were all banging into each other. One of us would crash, take out the guy behind, letting the 3rd guy by, just to watch him mess up , taking out one of us, and so on, and so on........ I just got back into the lead right before the bell lap. I thought I had a small gap back to Andy and Josh but they got right on my wheel along the long head-wind straight leading to the paved start hill. I had to sprint up the paved start hill in order to get off the pavement first. At this point in the race, I was hurting bad. The only chance I had was to lead out the last lap and NOT screw up. I some how managed to NOT mess up too bad too many times and got a small gap on Andy which stayed till the line. I was completely hammered after that race. Definately the hardest masters race this season, probably hardest race period. It took everything I had and every minute of the race to get that win. Breathing that hard in that single-digit air was nasty. With only a handfull of guys in the Open race, I figured I jump in and get some more pain and misery. By the time that race started, the course had definately changed a lot. A few sections got more rode in, but most of the course was just getting wetter and slushier. Once the race got going, I slotted into 3rd with Shadd Smith running away at the front and Chris Wallace in 2nd with Planet Bike owner Bob Downs in 4th. I managed to claw my way up to Wallace and got by him once, but then I botched the ride-up and he got back by. I stayed close and got back on his wheel before the long head-wind straight-a-way leading to the pavement. Just as I got on his wheel, he slid out and I crashed right into him. I got going pretty quick, but this allowed Bob Downs to get back up to me and eventually by me. I stayed close for a little bit, but I was dying. With a couple laps left I just didn't have much left so it was conservation mode from there and I came in for 3rd.
Posted by Mark Studnicki at 4:56 PM