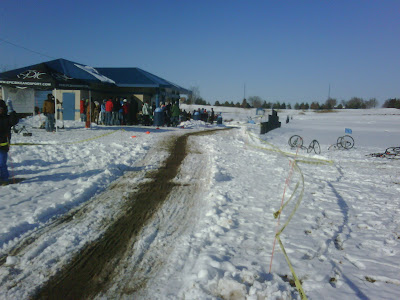 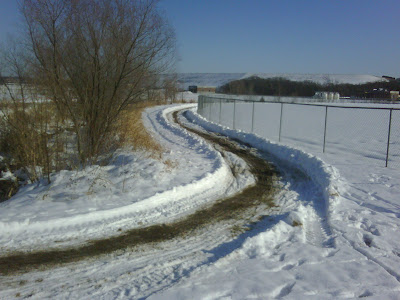 With all the fresh snow on the ground, it was a bit of a challenge for the organizers to get the coure into something race-able. I pre-rode it on Wednesday night and it was definately a mess. Lots of snow and it was melting so that means wet feet and a slushy bike stuck in one gear. Fortunately the temps overnight firmed everything up nicely. It was still in the high teens for race time but the sun was out. I kicked myself for not having a dedicated mud-tire setup at Kansas States, which cost me the race there. I made a point to not get caught out like that for these last few races of the year.
The course started on a 5ft wide sidewalk for about 100 yards then onto the first tricky off-camber grass section. Me and Steve Songer started on the front row since we are the top 2 in series points. We blasted up the start and I managed to lead into the first tricky section, but it was easy. The first section is all off-camber with a main high line along the fence and a low line if you couldn't hold on up high. Armed with fresh meat front and rear, I blasted across the upper line and into the next short off-camber climb to the 180 turn. Did a perfect one-foot pivot and hit the next little downhill section and short climb pretty hard. The next section was a long straigh slight-downhill section along the fence. I kept it steady down this the first time to recover a bit. Songer had some issues shortly after the start so it was teammate Jeff Uhnra behind me with Josh Taylor behind him. After the long downhill, there was a haybale dismount than some tricky stuff around the ballfields and back to the start/finish. The entire course had one main racing line about 12" wide, but other lines developed quick. The main line was getting wetter each lap. To avoid the freezing spray, I started using the off-lines more in the later laps. The course actually got faster each lap and it appeared to start freezing up on the last lap. I kept the pace steady and did a farily good job keeping the peddels from getting clocked. Only lost the use of one-side of my right pedal. With the race only 30 minutes, I did an extra lap to prepare for Sunday's Epic Cross race.
Posted by Mark Studnicki at 9:47 AM