First 'Cross races of the season in the books 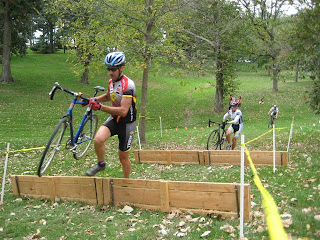 Saturday’s race in Newton Iowa, being the first one of the year, was just an exercise in getting-the-cobwebs-out. Got the PERFECT start which is a miracle considering it was a LeMans start with us running up the run-up and over the barriers to our bikes at the top. Led for a little bit in the early laps, but didn’t have the next higher gear to go with the attack of Josh Johnson (Big Shark) and John Olney (ICCC). Unfortunate mechanicals by Brian Eppen and JJ Bailey turned what would have been a 6th place into a 4th. Sean Walker (Atlas Core) pulled away from me in the closing laps to take the 3rd and final podium spot with me in 4th. Sunday’s race was a LOT DIFFERENT. Day 2 effects some racers different than others. This time I had the next higher gear were as some of the fast guys from Saturday seemed to go backwards. Sunday’s race had a traditional start and the bonus of a pair of Oakleys to the leader of the first lap. They did this crap last year and it makes for an “interesting” first lap. You’d be surprised how many people try to hole-shot off the start and then clog the race up 2 turns later. I got a bad start but at least I have the ability to get my way back into it within a couple turns. I wasn’t intending on going for the prime but thought is prudent to stay at the front anyways just in case I got itchy feet. Josh Johnson and Brian Eppen both seemed like they wanted the shades so I was more than happy just staying on their wheel. We all came through after lap 1 together with Brian taking the shades without much of a sprint from Josh or myself. We stayed together for a few laps before Brian started to check out. Josh got a small gap on me before a spectacular explosion. I quickly caught and dropped him, only to find him back on my wheel and than attack me the following lap. Than it happened again. I was just keeping it steady and he was yo-yo’ing like no tomorrow. He recovered with a couple laps to grab 2nd place while I had 3rd wrapped up. Meanwhile, the race behind us was falling apart. Saturday’s 2nd place John Olney crumbled at some point and DNF’d, Saturday’s 3rd place Sean Walker faded to finish 1-lap down as many did.
Posted by Mark Studnicki at 10:35 AM