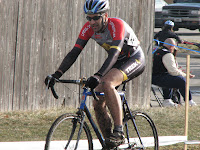 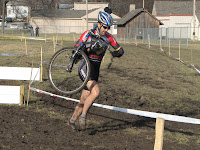 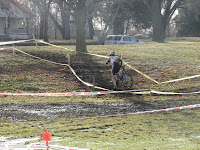 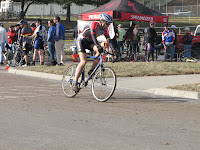 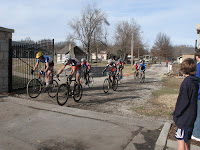 The last cross race of the season finally rolled around on a very un-seasonable warm day. This time of the year, it is usually 20 degrees or worse, which is was earlier in the week, but then it warmed up. The ground was well saturated and much of the course was deep mud. I got a terrible start but it was a long paved start so I didn't panic. I slotted into 4th as we hit the grass behind Shadd Smith, Bill Marshall, and Cameron Chambers. We stayed closely bunched together for the first half of lap 1. Before the race, I was watching the Masters race, and decided I might run a particular muddy turn with a long muddy section after it. Even if it wasn't faster, it would keep the bike from clogging up as much and maybe that would pay off later in the race. I was in 3rd coming into this section on lap 1 behind Cameron and Shadd. Up to this point in the day, everybody was riding this section, no matter how slow they were going. To the crowds amazement, I dismounted, shouldered the bike and ran into the turn, made the hard right turn and ran the following straight and passed Shadd in the process. I was now in 2nd with my sights set on chasing down Cameron. I gained some ground over the next lap but he was riding extremely well and pulled steadily away. Meanwhile, I pulled away from Shadd Smith while Bill Marshall solo'd around in 4th place. The couse also featured a tricky little dirt pile with some steps cut into it. I chose to ride that section everytime while the majority ran it. Riding was probably slower but it kept me on the bike at least. The 2 barriers were hoppable but the section after them was too muddy to ride efficiently so I didn't hop them and shouldered the bike over the barriers (which I usually don't do) and ran the following section. After that it was a short paved section followed by the gravel out and back to the finish. This race was the final round of the DeStad Cyclocross Series. Shadd Smith had the overall wrapped up and I had 2nd wrapped up so that's where it stayed.
Posted by Mark Studnicki at 5:48 PM