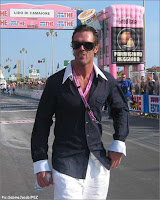 Mario Cipollini : Cycling's all-time biggest rock star is back, and with an American team, Rock Racing. Whether it's his hair, bronze tan, outrageous outfits, or his talent, he's cyclings biggest EVERYTHING past, present, and the most-likely future. I would love to see him rip the legs off of our fastest domestic sprinters, then hit the podium in a big pink pimp hat and fur coat. Hell, maybe if he's just driving the Rock Racing team car passing out bottles, you KNOW he'll be looking straight out of the Abercrombie & Fitch catalog. They don't make 'em like him anymore. Today's top Pro Tour sprinters just don't have the same flamboyant personalities. Allways the showman, yet still a constant professional. When he was sprinting well, few others could touch him. Many people don't know that he could actually CLIMB fairly well. Not a grand tour, 15km climber by any means, but on anything less than 5km, he was a brute. You would be hard-pressed to find any domestic pro currently racing that could stay on his wheel over the Koppenberg.
Posted by Mark Studnicki at 8:07 AM