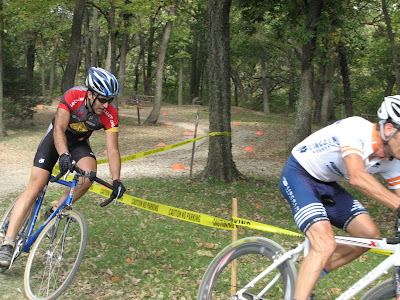 Well, first off racing that late the previous night was tough. Never really got any sleep. I was pretty tired just driving to the race which didn't get me off to a good mental start. My shoulder was pretty sore from last nights crash. Normally the Chris Cross course favors me with it's traditional sketchy gravelly single track stuff. Today I just wasn't riding that stuff on par with how I have in the past. I got a perfect start out front with Shadd Smith (Trek/HRRC), Joe Smaltz (Trek/HRRC), and Tom Price. Shadd pulled away early with Joe not farbehind, leaving me and Tom Price in 3rd and 4th. I felt OK for the next few laps staying with Tom, while up front Joe and Shadd joined up. Tom was flying and it was doing everything I could do just staying on his wheel. I didn't want to just sit there the whole race so I tried to come through and do some work but it just killed me and slowed him down. I was just hoping to get towed to the finish, him in 3rd and me 4th. I rode the gravel sections terrible. With about 7 laps to go, I just couldn't stay with Tom anymore and let him go. The next guy behind me was Brian Jensen. I figured I could take a half lap easy, then latch onto him when he came by and try to hold the 5th and final money spot. That was short lived, as I lost Brian's wheel. At this point I just gave up mentally and rode the remaining laps not really giving a shit. A bunch of guys caught me in the closing laps but I lost count and didn't care anymore. Once I lost that last podium spot and felt the way I did, I was done. I almost dropped out with a couple laps to go just because I didn't want to even race anymore. Obviously I was not recovered at all from the previous nights race like a lot of other guys. My biggest problem comes from my ability to get good starts, but that ends up sometimes working against me as I end up at the front following guys that are much faster than me. I end up getting hammered and drifting back. I might need to start further back and ride into the race and move up spots through out the race. I was joking with Tom Price on the start line that this year I definately feel a year older than last year. Actually, it's more like I didn't age at all for 4 years, then did all 4 this past year. Now that i'm 40, I need to really evaluate trying to race 20 cross races a season. I've cut my MTB race schedule down substantially over the years and I probably need to do the same in 'cross. I felt super strong up in Omaha last weekend but doing double race weekends back to back is brutal when you have the 50 hour job, and everything else in between. For next weekend, I'll skip Saturday's Topeka race and just do the Boulevard Race. Sometimes just being at a race knowing how much stuff I need to do at home tends to eat on you mentally. I was pretty devastated after the race today, but ultimately I have to realize that racing is not the most important thing in my life. I watched some of the other races go off today, and it was cool to watch guys in the back laughing and talking to each other and just having fun. I need to get that back. I need to able to go out and just ride my race and not focus so much on doing good at every race. The weather has been playing against me this 'cross season. It's been fairly warm and sticky every weekend. Cold air comes in during the week but is quickly replaced by "nice" weather for the weekend. This past MTB season, I had set a 90 degree limit to race in and might need to set something like a 75 degree limit for cross. A couple years ago, I got heat stroke at a MTB bike race and I've never really felt the same in the heat since. I've still won stuff in the heat but it just feels more miserable now.
Posted by Mark Studnicki at 5:50 PM